Injustice: Gods Among Us Year One: The Complete Collection (Paperback) 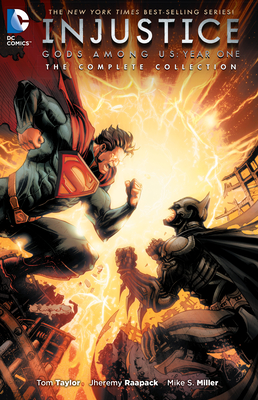 Forget everything you think you know about the DC Universe. Tradition is tossed aside and chaos erupts in Injustice: Gods Among Us Year One—The Complete Edition, inspired by the video game phenomenon! This graphic novel edition collects the initial year of the best-selling series in its entirety for the first time!

Superman is Earth’s greatest hero. But when the Man of Steel can’t protect the thing he holds most dear, he decides to stop trying to save the world—and start ruling it.

Now, the Last Son of Krypton is enforcing peace on Earth by any means necessary. Only one man stands between Superman and absolute power: Batman. And the Dark Knight will use any method at his disposal to stop his former friend from reshaping the world in his shattered image.

Tom Taylor is the creator of the Aurealis-Award Winning graphic novel series The Deep (which tells the adventures of a multiethnic family of underwater explorers who live on a submarine). The Deep has been optioned by Technicolor to be turned into a 26-episode CG animated series. He is perhaps best known for the best-selling DC Comics series, Injustice: Gods Among Us, and his many Star Wars series, which include Star Wars: Invasion and Star Wars: Blood Ties (which won the 2012 Stan Lee Excelsior Award). Taylor has written for DC Comics, Dark Horse Comics, IDW Publishing, Wildstorm, 2000 AD and Gestalt Comics.