Not on Our Watch: The Mission to End Genocide in Darfur and Beyond (Paperback) 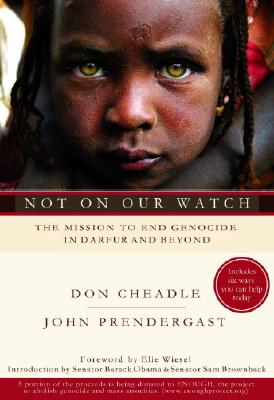 An Academy Award-nominated actor and a renowned human rights activist team up to change the tragic course of history in the Sudan -- with readers' help. While Don Cheadle was filming Hotel Rwanda, a new crisis had already erupted in Darfur, in nearby Sudan. In September 2004, then-Secretary of State Colin Powell termed the atrocities being committed there "genocide" -- and yet two years later things have only gotten worse. 3.5 million Sudanese are going hungry, 2.5 million have been displaced by violence, and 400,000 have died in Darfur to date. Both shocked and energized by this ongoing tragedy, Cheadle teamed up with leading activist John Prendergast to focus the world's attention. Not on Our Watch, their empowering book, offers six strategies readers themselves can implement: Raise Awareness, Raise Funds, Write a Letter, Call for Divestment, Start an Organization, and Lobby the Government. Each of these small actions can make a huge difference in the fate of a nation, and a people--not only in Darfur, but in other crisis zones such as Somalia, Congo, and northern Uganda.

Don Cheadle is an Academy Award-nominated actor who has appeared in Traffic, Ocean's Eleven, Crash, and Hotel Rwanda. John Prendergast is a Senior Advisor of the International Crisis Group, a former official in the Clinton White House, and a veteran of several NGOs and think tanks in Africa and the U. S. Cheadle and Prendergast have co-written op-eds for USA Today, the Wall Street Journal, Los Angeles Times, Boston Globe, International Herald Tribune, and other publications.