The Day I Shot Cupid: Hello, My Name Is Jennifer Love Hewitt and I'm a Love-aholic (Paperback) 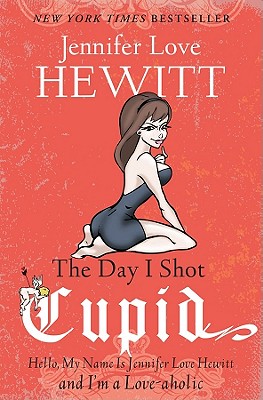 For any woman who has ever bought a self-help book and wondered why she bothered. (P.S. Now that I know he's just not that into me, where do I go from there? Yeah, thanks for that advice.) Jennifer Love Hewitt is a self-proclaimed "love-aholic" and hopeless romantic (her middle name is Love, after all!). She has been lucky and unlucky in love, and lived to tell -- and she's done it all in the spotlight. Much has been written about her love life--some true, most made up to sell magazines. Now Hewitt shares the real story of what she's learned navigating the dangerous dating waters. In The Day I Shot Cupid, Hewitt offers her hard-won wisdom and tells us how to embrace love with both feet on the ground. First, we have to shoot Cupid. We have to believe that happily-ever-after is hard work -- it's not all flowers and symphonies and floating hearts. Wise and wry and refreshingly honest, Hewitt talks about how to pick the right guy and how to know when to let the wrong ones go free, and she offers some surprising truths about the opposite sex. From twenty things to do after a breakup, to ten things to do before a date, to the perils of text flirting (Note: You are waiting. By the phone. For his response.), Hewitt uses stories and dating secrets to illustrate the idiotic, romantic, crazy, depressing, hilarious, awkward, glorious moments we all experience in relationships. Funny, quirky, and empowering, The Day I Shot Cupid deserves a place on every woman's nightstand, bookshelf, or coffee table, or tucked inside her oversized designer handbag.

Jennifer Love Hewitt began her acting career as a child by appearing in television commercials and the Disney Channel series "Kids Incorporated." She rose to fame in teenage popular culture via her role as Sarah Reeves in the Fox series "Party of Five," and as Julie James in the film "I Know What You Did Last Summer" and its sequel. In addition to acting, Hewitt has also served as a producer on certain film or television projects. Currently, she can be seen on the CBS television program "Ghost Whisperer" as Melinda Gordon, a young woman who can communicate with the ghosts of the dead. She recently added director to her resume when she directed an episode of GW.