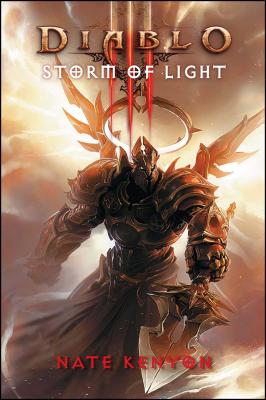 The High Heavens are healing after the fall of the Prime Evil. The Angiris Council has recovered the Black Soulstone and now stands vigil over the cursed artifact deep within the glimmering Silver City.

The High Heavens are healing after the fall of the Prime Evil. The Angiris Council has recovered the Black Soulstone and now stands vigil over the cursed artifact deep within the glimmering Silver City.

Amid these momentous events, Tyrael struggles with his position as the new Aspect of Wisdom, feeling out of place as a mortal among his angelic brethren and doubting his ability to fully embody his role. As he searches within himself and the Heavens for reassurance, he senses the Black Soulstone's grim influence on his home. Where harmony of light and sound once reigned, a mounting discord is threatening to shroud the realm in darkness. Imperius and the other archangels vehemently oppose moving or destroying the crystal, leading Tyrael to put Heaven’s fate in the hands of humankind . . . .

Drawing powerful humans to his side from the far ends of Sanctuary, Tyrael reforges the ancient Horadrim and charges the order with an impossible task: to steal the Soulstone from the heart of Heaven. Among the champions entrusted with this burden are Jacob of Staalbreak, former avatar of Justice and guardian of the angelic blade El'druin; Shanar, a wizard with phenomenal powers; Mikulov, a lithe and reverent monk; Gynvir, a fearless and battle-hardened barbarian; and Zayl, a mysterious necromancer. With time and the forces of both good and evil against them, can these heroes unite as one and complete their perilous mission before Heaven falls to ruin?

Nate Kenyon’s first novel, Bloodstone, was a Bram Stoker Award finalist and won the P&E Horror Novel of the Year award. His second, The Reach, also a Stoker Award finalist, received a starred review from Publishers Weekly and was recently optioned for film. The Bone Factory was called “masterful” by Booklist. His fourth, Sparrow Rock, was released in 2010 He is also the author of Diablo III: The Order and StarCraft: Ghost: Spectres (2011). He is a member of the Horror Writers Association and International Thriller Writers.