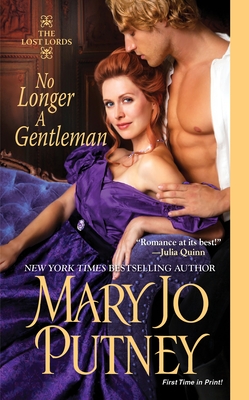 By Mary Jo Putney
$8.95
Not Available

This is book number 4 in the Lost Lords series.

Grey Sommers, Lord Wyndham, never met a predicament he couldn't charm his way out of. Then a tryst with a government official's wife during a bit of casual espionage in France condemns him to a decade in a dungeon, leaving him a shadow of his former self. Yet his greatest challenge may be the enigmatic spy sent to free his body—the only woman who might heal his soul.

Cassie Fox lost everything in the chaos of revolution, leaving only a determination to help destroy Napoleon's empire through her perilous calling. Rescuing Grey is merely one more mission. She hadn't counted on a man with the stark beauty of a ravaged angel, whose desperate courage and vulnerability thaw her frozen heart. But a spy and a lord are divided by an impassable gulf even if they manage to survive one last, terrifying mission…

Praise for Loving a Lost Lord

"Romance at its best!"
—Julia Quinn

Mary Jo Putney is a New York Times and USA Today bestselling author who has written over sixty novels and novellas. A ten-time finalist for the Romance Writers of America RITA, she has won the honor twice and is on the RWA Honor Roll for bestselling authors. In 2013 she was awarded the RWA Nora Roberts Lifetime Achievement Award.  Though most of her books have been historical romance, she has also published contemporary romances, historical fantasy, and young adult paranormal historicals. She lives in Maryland with her nearest and dearest, both two and four footed. Visit her at maryjoputney.com.