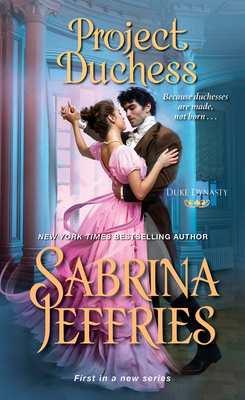 This is book number 1 in the Duke Dynasty series.

From New York Times bestselling author Sabrina Jeffries comes a sparkling new series about an oft-widowed mother’s grown children, who blaze through society in their quest for the truth about their fathers . . . and in the process find that love just might conquer all . . .

A series of stepfathers and a difficult childhood have left Fletcher “Grey” Pryde, 5th Duke of Greycourt, with a guarded heart, enviable wealth, and the undeserved reputation of a rogue. Grey’s focus on expanding his dukedom allows him little time to find a wife. But when his mother is widowed yet again and he meets the charmingly unconventional woman managing his stepfather’s funeral, he’s shocked to discover how much they have in common. Still, Grey isn’t interested in love, no matter how pretty, or delightfully outspoken, the lady . . .

Beatrice Wolfe gave up on romance long ago, and the arrogant Duke of Greycourt with his rakish reputation isn’t exactly changing her mind. Then Grey agrees to assist his grief-stricken mother with her latest “project”: schooling spirited, unfashionable Beatrice for her debut. Now that Beatrice is seeing through Grey’s charms to his wounded heart, she’s having trouble keeping him at arm’s length. But once Grey starts digging into her family’s secrets, she must decide whether her loyalties lie with her family . . . or with the man whose lessons capture her heart . . .

SABRINA JEFFRIES is the New York Times bestselling author of more than fifty novels and works of short fiction (some written under the pseudonyms Deborah Martin and Deborah Nicholas). Whatever time not spent writing in a coffee-fueled haze is spent traveling with her husband and adult autistic son or indulging in one of her passions—jigsaw puzzles, chocolate, and music. With over nine million books in print in more than twenty-one languages, the North Carolina author never regrets tossing aside a budding career in academics for the sheer joy of writing fun fiction, and hopes that one day a book of hers will end up saving the world.

“Jeffries’s riveting first Duke Dynasty regency has a little bit of everything: an independent, forthright woman; a handsome duke with trust issues; and a mystery…Complex, intense characters heat up the pages with scintillating love scenes amid the intrigue. Jeffries continues to impress, and romance fans will eagerly await the next book.”- Publishers Weekly

“Readers will love Grey and Beatrice, and the nicely paced, intriguing plot will keep them engaged…An appealing historical romance from a fan favorite.”– Kirkus Reviews

"Excellent blend of great characters and witty dialogue makes this a delicious first in a new series." --BookPage (Starred Review)

“Master storyteller Jeffries is at the top of her game.” —RT Book Reviews, Top Pick on The Secret of Flirting

“With its irresistible combination of witty banter, well defined characters, and a wonderful surfeit of breathtaking sensuality, the latest in Jeffries’ Sinful Suitors series is a straight flush.” —Booklist, starred review on The Danger of Desire

“Lovely, poignant, and powerful.” —Kirkus Reviews on The Study of Seduction