What Happens in the Ballroom (Designing Debutantes #2) (Mass Market) 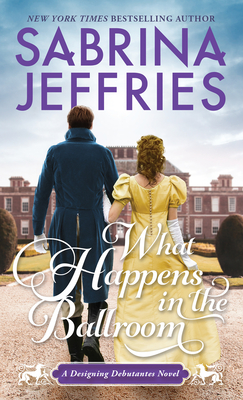 This is book number 2 in the Designing Debutantes series.

From one of the best-known names in historical romance, New York Times bestselling author Sabrina Jeffries, comes the second in her dazzling Designing Debutantes series featuring a talk-of-the-ton trio of young women who’ve eschewed working as governesses to utilize their talents for fashion, food, and music, by running their own party planning enterprise, Elegant Occasions. And if they, and their wealthy clients, happen to find love along the way, it just makes their efforts all the more rewarding!

A youthful widow, Eliza Pierce is enjoying both freedom and financial success as part of Elegant Occasions. Then her late husband’s best friend, Nathaniel Stanton, the Earl of Foxstead, hires Elegant Occasions to help another young widow of an officer become part of high society, and Eliza wonders why. Is the woman a relative? Or is she the earl’s mistress and her adorable toddler his child? If so, why does he take Eliza in his arms every chance he gets . . .

Foxstead’s family situation makes it difficult for him to marry, so his visceral attraction to Lieutenant Pierce’s widow is an unwelcome complication. Sworn to secrecy concerning his friend’s life in the army, Foxstead is trying to honor the man’s last wishes, even when it means being around Eliza every day. But how can he resist when the fetching Eliza keeps tempting him to break his own rules? For if he dares to expose the truth, will she ever forgive him? Or will she banish him from her life forever . . .

Sabrina Jeffries is the New York Times bestselling author of more than fifty novels and works of short fiction (some written under the pseudonyms Deborah Martin and Deborah Nicholas). Her writing has been published in more than twenty-one languages and there are over nine million copies of her books in print. A four-time RITA® Award-finalist, Jeffries has won the Holt Medallion Award, the Maggie, and the Booksellers' Best Award. After earning her Ph.D. in English Literature from Tulane University, she chose writing over academics, and now her sexy and humorous historical romances routinely land on the New York Times and USA Today bestseller lists. Sabrina lives in North Carolina with her husband and adult son, who has inspired her to actively champion the cause of autistic children. Visit her online at SabrinaJeffries.com.

Praise for the Duke Dynasty Series:

“Jeffries is an expert in the Regency era… the most important thing to know is that women were expected to be pretty, quiet and boring. The thing that makes all of Jeffries’ heroines stand out is that none of them are quiet and boring. Pretty? Often. But the women she writes are spirited, intelligent, devilish, brave, independent and politically and culturally savvy. They are true heroines; she-ros, if you will. And Olivia Norley is definitely a she-ro.” —Bookpage on Who Wants to Marry a Duke

“Sabrina Jeffries is touted as a master of romance—and the first novel in her new Duke Dynasty series is as steamy as they come…a witty, scintillating read.” —Woman’s World, Editor’s Pick for Project Duchess

“An excellent blend of great characters and witty dialogue make this a delicious first in a new series.” —BookPage, STARRED REVIEW for Project Duchess

“The chemistry is as intense in the bedroom as it is in the science lab in Jeffries’s intoxicating third Duke Dynasty Regency romance…Jeffries’s perfect blend of romance, mystery, and suspense is sure to have series readers anxious for more.” —Publishers Weekly on Who Wants to Marry a Duke

“Jeffries’s riveting first Duke Dynasty regency has a little bit of everything: an independent, forthright woman; a handsome duke with trust issues; and a mystery…Complex, intense characters heat up the pages with scintillating love scenes amid the intrigue. Jeffries continues to impress, and romance fans will eagerly await the next book.” —Publishers Weekly on Project Duchess

“Readers will love Grey and Beatrice, and the nicely paced, intriguing plot will keep them engaged…An appealing historical romance from a fan favorite.” —Kirkus Reviews on Project Duchess

“Olivia’s scientific gifts will draw in and delight fans of bluestocking romances, such as Tessa Dare’s A Week To Be Wicked.” —Library Journal on Who Wants to Marry a Duke

“Beautifully showcases the author’s gift for creating vividly etched characters (including a well-matched pair of protagonists) and then expertly placing them within a tautly constructed plot spiced with danger and plenty of red-hot sensuality.” —Booklist on The Bachelor

“Best-selling Jeffries, whose literary brand is synonymous with smart, sexy historical romance, wraps up her Regency-set Duke Dynasty series and the investigation into a series of ducal murders that began in Project Duchess (2019) on a high note with a perfectly fashioned love story rich in smoldering sexual chemistry, sharp wit, and a dash of danger.” —Booklist on Undercover Duke

“Fans will delight in revisiting Sheridan’s large family in this heated, twisty tale of love and deception.” —Publishers Weekly on Undercover Duke

“I have been wanting Vanessa and Sheridan to pair up since book one. She is the perfect contrast to his stuffiness… Undercover Duke is a brilliant conclusion to a fun and entertaining series.” —Romance Junkies on Undercover Duke