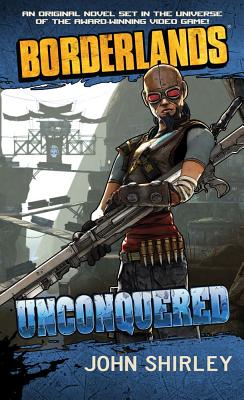 An original novel set in the universe of the award-winning video game!

Everyone already knows that. But the General of an army of Psycho Soldiers takes on this planetary hell headfirst, planning to enslave all of the Borderlands. And that General . . . is a Goddess. The General Goddess, Gynella, is a cunning maniac who uses the dark science of the vile Dr. Vialle to control a growing army of bandits and malcontents. Only four people stand in Gynella’s way.

Daphne?! Better known as Kuller the Killer, she was once the galaxy’s most effective assassin for organized crime—until her forced retirement on this abandoned wasteland of a world. Roland is one of the toughest fighters in the Borderlands, and Mordecai is the best shot in four solar systems—all the two really want is to get to the Crystalisks, harvest some Eridium, get rich, and leave the planet for the nearest intergalactic party. But there are nightmarish creatures to deal with: Varkids and Skags and Threshers. Worse, Gynella is still in their way. Brick—a pile of walking muscle who lives to smash his enemies, could be their ally or their enemy . . . but you’d definitely rather have him on your side. As for Daphne Kuller? Don't make her mad. Just . . . don’t.

If you want to hear about the whole thing, take a ride on the bus to Fyrestone with Marcus. Because Marcus has a tale to tell you . . . an untold story of the Borderlands.