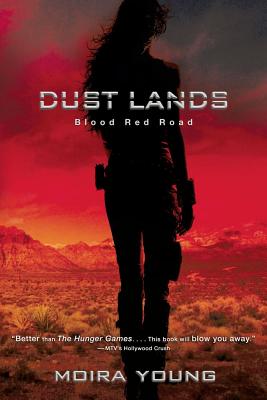 This is book number 1 in the Dust Lands series.

“This debut novel is a searing adventure that follows Saba, an 18-year-old girl searching for her kidnapped twin, as she travels throughout a desolate, post-apocalyptic world. Saba's journey is a blend of coming-of-age and bloody survival in a world that has lost all essence of sanity and decency. I was utterly captivated by this story of sisterly devotion, desolation, and love.”
— Heather Christman, Warwick's, La Jolla, CA

The book that will “blow you away”** has a dazzling new look in paperback!

Saba has spent her whole life in Silverlake, a dried-up wasteland ravaged by constant sandstorms. The Wrecker civilization has long been destroyed, leaving only landfills for Saba and her family to scavenge from. That's fine by her, as long as her beloved twin brother Lugh is around. But when four cloaked horsemen capture Lugh, Saba's world is shattered, and she embarks on a quest to get him back.

Suddenly thrown into the lawless, ugly reality of the outside world, Saba discovers she is a fierce fighter, an unbeatable survivor, and a cunning opponent. Teamed up with a handsome daredevil named Jack and a gang of girl revolutionaries called the Free Hawks, Saba’s unrelenting search for Lugh stages a showdown that will change the course of her own civilization.

Blood Red Road has a searing pace, a poetic writing style, and an epic love story—making Moira Young is one of the most exciting new voices in teen fiction.

Moira Young is the author of the Dust Lands series. The first book, Blood Red Road, won the Costa Children’s Book Award, was a Cybils Award Winner for fantasy and science fiction, and was a Best Fiction for Young Adults selection. The Dust Lands continues with Rebel Heart, which received a starred review in Publishers Weekly, and Raging Star. A native Canadian, Moira lives with her husband in the UK. Learn more at MoiraYoung.com.

*"Young's powerful debut, first in the Dustlands series, is elevated above its now familiar postapocalyptic setting by an intriguing prose style and strong narrative voice that show a distinct Cormac McCarthy vibe. It's a natural for Hunger Games fans."

“Blood Red Road will capture any reader who picks it up. I love everything about Saba - her language, her intensity, her heart. Everyone should read her story.”--James Dashner, author of The Maze Runner

“I absolutely loved Blood Red Road. What a great read! Moira Young goes over the top with a most engaging heroine. Saba is a crusty, foul-tempered warrior woman who must be covered in scar tissue by the end of the book, but men still follow her around like starving wolves. The dialogue is fast and often humorous, the pace never lets up. No situation is so bad that it can't get worse in the next couple of pages. I especially liked the awakening of the hellwurms as they emerge to feed. Well done, Ms. Young!”--Nancy Farmer, author of The House of the Scorpion

“Better than The Hunger Games. . . . This book will blow you away.”—MTV’s Hollywood Crush blog

“Is it any surprise that Ridley Scott swiftly optioned the book?”—New York Times Book Review