The Blue Cascade: A Memoir of Life after War (Hardcover) 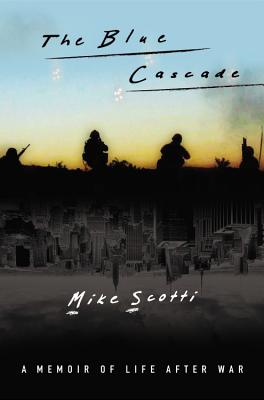 In this searing and beautifully written memoir, Marine Lieutenant and CNN Op-Ed contributor Mike Scotti charts a course from the front lines of Iraq back home to New York, showing how sometimes the hardest battle is the one after the war.

Sometimes the hardest battle is the one after the war. As one of the soldiers on the front line of Operation Iraqi Freedom, Lieutenant Scotti was taught that weakness is what gets you killed: no hesitation, focus your energies on your objective, and complete the mission. Upon returning from war, Scotti approached his new life the same way. He ignored the creeping depression and numbness he called "The Blue Cascade" and charged ahead toward his goal to get an MBA, secure a high-paying finance job, and retire young and rich.

But he was being eaten away inside, and scenes of drunken emotion and raging violence were becoming more and more frequent. Years after returning from active combat, he eventually found himself contemplating suicide. Through a series of powerful events, Scotti was ultimately able to find a path to healing and begin his journey back to life, finally emerging with the following wisdom for fellow sufferers of post-traumatic stress:It's ok if you are not ok.

Mike Scotti joined the United States Marine Corps Reserves while still an undergraduate at the University of Miami, Florida. After graduation, Scotti attended the Marine Corp's Officer Candidate School in Quantico, Virginia. He was commissioned a second lieutenant and served four years on active duty as an artillery officer and platoon commander in the First Marine Division. After being honorably discharged from active duty, Scotti attended the New York University Stern School of Business, where he received a Master of Business Administration with a specialization in Finance. Mike Scotti is the subject of the critically acclaimed, award-winning documentary film Severe Clear, which was created from the extensive video journals he kept while serving in Iraq.

"[An] unflinchingly honest account of an ex-Marine's struggle to re-acclimate to civilian life after returning from Operation Iraqi Freedom... An unapologetic gut-wrencher of a book." -Kirkus Reviews