The Trial of Henry Kissinger (Paperback) 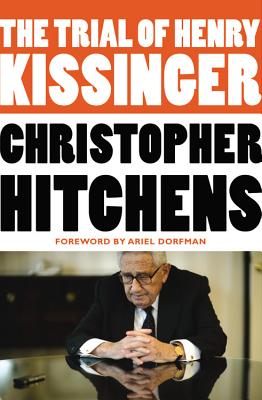 By Christopher Hitchens, Ariel Dorfman (Introduction by)
$21.27
Not Available

"If the courts and lawyers of this country will not do their duty, we shall watch as the victims and survivors of this man pursue justice and vindication in their own dignified and painstaking way, and at their own expense, and we shall be put to shame."

Forget Pinochet, Milosevic, Hussein, Kim Jong-il, or Gaddafi: America need look no further than its own lauded leaders for a war criminal whose offenses rival those of the most heinous dictators in recent history-Henry Kissinger.

Employing evidence based on firsthand testimony, unpublished documents, and new information uncovered by the Freedom of Information Act, and using only what would hold up in international courts of law, The Trial of Henry Kissinger outlines atrocities authorized by the former secretary of state in Indochina, Bangladesh, Chile, Cyprus, East Timor, and in the plight of the Iraqi Kurds, "including conspiracy to commit murder, kidnap, and torture."

With the precision and tenacity of a prosecutor, Hitchens offers an unrepentant portrait of a felonious diplomat who "maintained that laws were like cobwebs," and implores governments around the world, including our own, to bring him swiftly to justice.

Christopher Hitchens was a contributing editor to Vanity Fair,Slate, and the Atlantic, and the author of numerous books, including works on Thomas Jefferson, Thomas Paine, and George Orwell. He also wrote the international bestsellers god Is Not Great: How Religion Poisons Everything, Hitch-22: A Memoir, and Arguably. He died in December 2011.

"Hitchens is a brilliant polemicist and a tireless reporter. Both sets of skills are on display throughout this book as he presents damning documentary evidence against Kissinger in case after case."—San Francisco Chronicle

"A disturbing glimpse into the dark side of American power, whose consequences in remote corners of the globe are all too often ignored. Its countless victims have found an impassioned and skillful advocate in Christopher Hitchens."—Sunday Times (London)

"An eloquent and devastating indictment of Henry Kissinger's involvement in the war in Indochina, genocide in East Timor, and many other acts of indiscriminate murder."—Village Voice

"This book is so studiedly defamatory that if Kissinger values his reputation, he really must sue."—Literary Review

"I find it contemptible."—Henry Kissinger