The Missionary Position: Mother Teresa in Theory and Practice (Paperback) 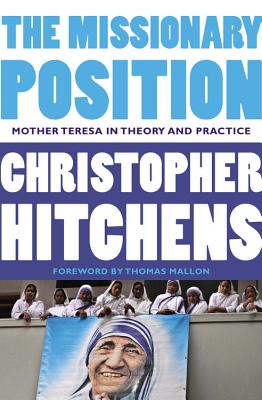 "A religious fundamentalist, a political operative, a primitive sermonizer, and an accomplice of worldly secular powers. Her mission has always been of this kind. The irony is that she has never been able to induce anybody to believe her. It is past time that she was duly honored and taken at her word."

Among his many books, perhaps none have sparked more outrage than The Missionary Position, Christopher Hitchens's meticulous study of the life and deeds of Mother Teresa.

A Nobel Peace Prize recipient beatified by the Catholic Church in 2003, Mother Teresa of Calcutta was celebrated by heads of state and adored by millions for her work on behalf of the poor. In his measured critique, Hitchens asks only that Mother Teresa's reputation be judged by her actions-not the other way around.

With characteristic élan and rhetorical dexterity, Hitchens eviscerates the fawning cult of Teresa, recasting the Albanian missionary as a spurious, despotic, and megalomaniacal operative of the wealthy who long opposed measures to end poverty, and fraternized, for financial gain, with tyrants and white-collar criminals throughout the world.

Christopher Hitchens was a contributing editor to Vanity Fair,Slate, and the Atlantic, and the author of numerous books, including works on Thomas Jefferson, Thomas Paine, and George Orwell. He also wrote the international bestsellers god Is Not Great: How Religion Poisons Everything, Hitch-22: A Memoir, and Arguably. He died in December 2011.

"Anyone with ambivalent feelings about the influence of Catholic dogma (especially concerning sex and procreation); about the media's manufacture of images; or about what one can, should, or shouldn't do for someone less fortunate, should read this book."—San Francisco Bay Guardian

"A dirty job but someone had to do it. By the end of this elegantly written, brilliantly argued piece of polemic, it is not looking good for Mother Teresa."—Sunday Times (London)

"If there is a hell, Hitchens is going there for this book."—New York Press