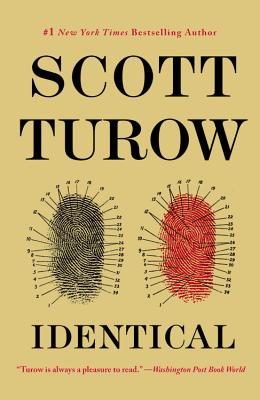 State Senator Paul Giannis is a candidate for Mayor of Kindle County. His identical twin brother Cass is newly released from prison, 25 years after pleading guilty to the murder of his girlfriend, Dita Kronon. When Evon Miller, an ex-FBI agent who is the head of security for the Kronon family business, and private investigator Tim Brodie begin a re-investigation of Dita's death, a complex web of murder, sex, and betrayal-as only Scott Turow could weave-dramatically unfolds...

"A compulsively readable tale of love, guilt and revenge that may take its cues from the story of Pollux and Castor and other Greek myths but resonates even more strongly with the near-epic Kindle County narrative Turow has created over some three decades. Even when "Identical's" many twists challenge the reader to figure out who's on first, it is Turow's deftly drawn characters - coping with advancing age, old grief and lost love - that linger in the mind."—Los Angeles Times

"Suspense with twists and turns from a master of the form."—Sacramento Bee

"Complexity is the hallmark of Turow's brainy legal thrillers."—USA Today

"Turow has obvious fun with his mythological conceit...the process of discovery takes nice and sometimes unexpected twists. Amid the super modernity of DNA tests, the austerity of case law and the tangles of contemporary politics, Turow never loses sight of the ancient underpinnings of his story...Classic (in more senses than one) Turow."—Kirkus

"A wrenching story of violence, betrayal, and human credibility."—Library Journal

"Scott Turow's new novel is the dedicated fiction-reader's version of El Dorado: a driving, unputdownable courtroom drama/murder mystery that is also a literary treasure, written in language that sparkles with clarity and resonates with honest character insight. I came away feeling amazed and fulfilled, as we only do when we read novelists at the height of their powers. Put this one on your don't-miss list." (Praise for Innocent)
—Stephen King