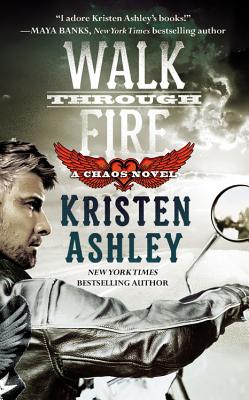 This is book number 4 in the Chaos series.

Millie Cross knows what it's like to burn for someone. She was young and wild and he was fierce and even wilder-a Chaos biker who made her heart pound. They fell in love at first sight and life was good, until she learned she couldn't be the woman he needed and made it so he had no choice but to walk away. Twenty years later, Millie's chance run-in with her old flame sparks a desire she just can't ignore. And this time, she won't let him ride off . . .

Bad boy Logan "High" Judd has seen his share of troubles with the law. Yet it was a beautiful woman who broke him. After ending a loveless marriage, High is shocked when his true love walks back into his life. Millie is still gorgeous, but she's just a ghost of her former self. High's intrigued at the change, but her betrayal cut him deep-and he doesn't want to get burned again. As High sinks into meting out vengeance for Millie's betrayal, he'll break all over again when he realizes just how Millie walked through fire for her man . . .

"I have never cried so many times and so desperately as I did while reading this breathtaking story, every aspect of it touching everything that I am, everything that I dream of... Whether you're a fan of MC romances or not, it does not matter in this case-this is a story that first and foremost celebrates women for their resilience, for their selflessness, for their ability to love without limits, all the while underlining the meaning of true love."—Natasha is a Book Junkie

"Ashley delivers a deeply emotional second installment of the Chaos contemporary romance series... Punctuated by blistering-hot sex scenes and fascinating glimpses into the tough world of motorcycle clubs, this romance also delivers true heart and emotion, and a story that will stay with the reader long after the final page is turned."—Publishers Weekly (starred review) on Fire Inside

"Top Pick! This is a phenomenal read that I just couldn't put down. Kristen Ashley is the tops, bar none, and Breathe gets 5 stars from this grateful reader!"—Night Owl Reviews

"I felt all of the rushes, the adrenaline surges, the anger spikes... my heart pumping in fury. My eyes tearing up when her my heart (I mean... her heart) would break."—Maryse's Book blog on Motorcycle Man