On the Brink: Inside the Race to Stop the Collapse of the Global Financial System -- With Original New Material on the Five Year Anniversary of the Financial Crisis (Paperback) 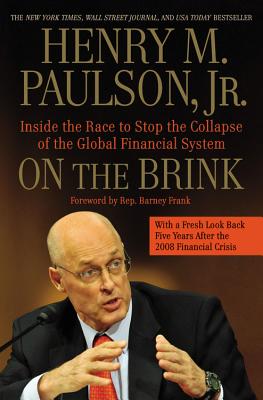 Former Secretary of the Treasury Hank Paulson -- who was at the very epicenter of the crashing financial markets -- provides a startling, first- person account of what really happened during this time of global financial crisis - and this revised edition features fresh and original material from Paulson on the five-year-anniversary of the 2008 financial crisis.

From the man who was in the very middle of this perfect economic storm, Paulson puts the reader in the room for all the intense moments as he addressed urgent market conditions, weighed critical decisions, and debated policy and economic considerations with of all the notable players-including the CEOs of top Wall Street firms as well as Ben Bernanke, Timothy Geithner, Sheila Bair, Nancy Pelosi, Barney Frank, presidential candidates Barack Obama and John McCain, and then-President George W. Bush.

More than an account about numbers and credit risks gone bad, On the Brink is an extraordinary story about people and politics-all brought together during the world's impending financial Armageddon.

As the CEO of Goldman Sachs from 1999-2006 and then as the Treasury Secretary of the United States from 2006-2009, Hank Paulson has sat across the bargaining table from countless Chinese politicians as both a banker and a statesman. Since leaving Washington, the former Treasury Secretary has worked on bridging the gap between East and West through The Paulson Institute, which he describes not as a think tank but as a "think and do" tank.

From the Foreword, by Rep. Barney Frank, especially written for the trade paper edition:

"For many people, what will be most striking about this foreword is the fact that I wrote it. It's not every day a partisan, liberal Democrat gets a call from a conservative, high-ranking member of the George W. Bush administration asking for a favorable introduction to anything. But when former secretary of the Treasury Henry M. Paulson, Jr., called, I was quick to agree to express in print my enthusiasm for his excellent recounting of some of the most important and controversial events in our recent national history."