The Time of Our Lives: Politics, Passions, and Provocations (Paperback) 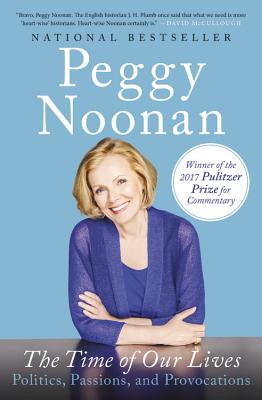 The 2017 Pulitzer Prize Winner for Commentary and conservative icon Peggy Noonan offers her most insightful work, including her Wall Street Journal columns about the 2016 Election.

New York Times bestseller The Time of Our Lives travels the path of Peggy Noonan's remarkable and influential career, beginning with a revealing essay about her motivations as a writer and thinker. It's followed by an address to students at Harvard University on the drafting of President Reagan's speech the day the space shuttle Challenger exploded. Then comes one surprising chapter after the next including:

"People I Miss" -- memorable salutes to the likes of Tim Russert, Joan Rivers, Margaret Thatcher, and others.

"Making Trouble" -- Peggy's sharpest, funniest and most critical columns about Democrats and Republicans, the idiocracy of government, and Beltway disconnect.

"I Just Called to Say I Love You" -- Peggy's most poignant writing capturing the country's grief and recovery in the wake of 9-11, and clear-eyed foresight on what lay ahead in terms of war and sacrifice.

"The Loneliest President Since Nixon" -- tracking hope and change as it became disillusionment and disappointment with President Obama.

And other sections where Peggy discerns the mood of the country ("State of the Union"), the melodrama of the historic 2008 election ("My Beautiful Election"), her battles with the Catholic Church ("What I Told the Bishops") and lighter meditations on baseball, a snowy afternoon in Brooklyn, and motherhood ("Having Fun").

Annotated throughout, The Time of Our Lives articulates Peggy's conservative vision, demonstrating why she has been awarded the Pulitzer Prize, journalism's highest honor.

The 2017 Pulitzer Prize winner for Commentary, Peggy Noonan is the author of nine books, a weekly columnist for the Wall Street Journal, and was a primary speechwriter and Special Assistant to President Ronald Reagan. Six of Noonan's books have been New York Times bestsellers. Noonan is a trustee of the Manhattan Institute. She makes regular appearances on CBS's Face the Nation, ABC's This Week, and NBC's Meet The Press.

"[THE TIME OF OUR LIVES] is an examination of the soul of a politics and a culture...This book helps, by teaching, encouraging, challenging, chronicling - by giving thanks and raising grave concerns, too, but always laced with hope illuminated by faith."—The National Review

"Noonan's new book shines...[Her] prose is marked by a democratic straightforwardness...She demonstrates a profound understanding of the ambitions that drive politicians."—RealClear Politics

"Noonan's eye for poetry in the mundane allows her to articulate the time of our lives, even as she appreciates each individual person's life and actions."—The Weekly Standard

"No one writes more beautifully about America than Peggy Noonan-our politics, our culture, our lives. She's the best friend every nation should have, the one who will tell you everything that's wrong with you, but say it with so much love, and such wry honesty that you can't help but nod your head in agreement."—Megan McArdle, columnist, Bloomberg View

"Peggy Noonan is a national treasure. Her words and essays have swept through decades, capturing events and moments. With grace and optimism, Noonan confides in the reader as she would a dear friend. And in a world that is clicking too fast, she reminds us how the best of life is found in the details: of where we have been, and of what we are now."—Matt Drudge

"Peggy Noonan's columns and essays are exquisitely written and perceptively argued. I am a devoted reader. Her writings illuminate the issues and provide a vision of our future."—Henry Kissinger

"Some people think politics is all about money and power. Others imagine it is all about philosophy and the power of ideas. Peggy Noonan knows, and teaches us all, that politics is about human beings living together. That means that understanding politics requires more than cynicism and more even than idealism -- it requires sensitivity, experience, wisdom and insight. Noonan does more than tell us that: she shows us, because she possesses all of these in droves. She approaches the most pressing questions of American life with an appreciation for the highs and lows that make us all human, and a knack for seeing exactly what her subjects want to hide. A collection like this one helps us appreciate the enduring value of such insight: Noonan's writing is always about current events, yet also always full of timeless lessons on how to look at politics and really see it."—Yuval Levin, editor of National Affairs

"The only predictable thing about Noonan's column is its unpredictability."—Tim Russert

"Superb...[Noonan's] insights are acute, sharply stated, and extremely moving...The lasting message of this powerful collection is that the bubble that today's politicians live in, insulated from the people they govern, uniquely threatens the American commonwealth."—Publisher's Weekly

Conventional wisdom assigns most ambitious women to a place on the political left. So how, then, has Noonan carved out a remarkably successful career as a journalist, presidential speechwriter, and author on the political right? In this impressive collection of speeches and journalistic commentaries, readers hear the
convention-defying voice that has made Noonan a national presence as an exponent of conservatism. Readers hear that distinctive voice in, for instance, an elegiac reflection on the exceptional normalcy and fair-mindedness of fellow journalist Tim Russert, in an acerbic indictment of President Obama for not joining with other world leaders in a show of solidarity after the Charlie Hebdo killings, and in a hopeful prediction of the difference Pope Francis will make for Catholicism. Addressing other topics-including 9/11, the Iraq War, Obamacare, illegal immigration, the machinations of both Clintons, and internecine war in the Republican Party-that voice varies considerably in tone yet develops a coherent perspective of sober concern about the trajectory of American culture and politics. But readers may value most the exceptionally candid and capacious introduction, in which Noonan reflects on her childhood, her maturation as a journalist, and her philosophy as a professional writer. A refreshingly spontaneous and engaging collection.—Booklist, Starred Review

"Thoroughly enjoyable and intellectually compelling... Noonan captures her subjects--people and society, moments and eras--with an excellence and durability to which I, as a writer, must aspire but know, deep down, I will rarely achieve."—Ross Kaminsky, The American Specatator

"THE TIME OF OUR LIVES is terrific...it's just great thinking turned to print."—The Buffalo News