The Zero and the One: A Novel (Paperback) 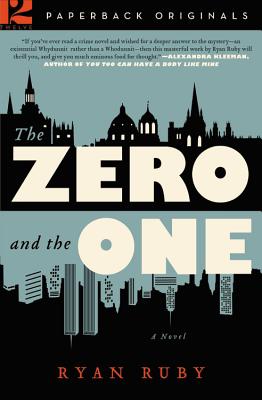 A gothic twist on the classic tale of innocents abroad, The Zero and the One is a meditation on the seductions of friendship and the power of dangerous ideas that registers the dark, psychological suspense of Patricia Highsmith's The Talented Mr. Ripley and the intellectual and philosophical intrigue of John Banville's The Book of Evidence.

A shy, bookish scholarship student from a working-class family, Owen Whiting has high hopes of what awaits him at Oxford, only to find himself adrift and out of place among the university's dim aristocrats and posh radicals. But his life takes a dramatic turn when he is assigned to the same philosophy tutorial as Zachary Foedern, a visiting student from New York City. Rich, brilliant, and charismatic, Zach takes Owen under his wing, introducing him to a world of experiences Owen has only ever read about.

From the quadrangles of Oxford to the seedy underbelly of Berlin, they practice what Zach preaches, daring each other to transgress the boundaries of convention and morality, until Zach proposes the greatest transgression of all: a suicide pact. But when Zach's plans go horribly awry, Owen is left to pick up the pieces in the sleek lofts and dingy dives of lower Manhattan. Now he must navigate the treacherous boundary between illusion and reality if he wants to understand his friend and preserve a hold on his once bright future.

Ryan Ruby was born in 1983. His fiction and criticism have appeared in a variety of literary magazines including The Baffler,Conjunctions, Dissent, Lapham's Quarterly, and n+1. He has translated two novellas from French for Readux Books. He lives in Berlin.

"A gripping, intellectually agile book that dresses like a coming of age narrative, but soon reveals itself to be something new, wholly original and philosophically rich. If you've ever read a crime novel and wished for a deeper answer to the mystery - an existential Whydunnit rather than a Whodunnit - then this masterful work by Ryan Ruby will thrill you, and give you much ominous food for thought."—Alexandra Kleeman, author of You Too Can Have A Body Like Mine

"Ryan Ruby has written a brilliant and captivating novel...dark as Patricia Highsmith's Ripley novels, with...a setting that reminds one of Evelyn Waugh, and...texture that evokes P.G. Wodehouse. It's as sharp as a tack, and the pages turn themselves."—Benjamin Hale, author of The Evolution of Bruno Littlemore

"Beautifully written and minutely observed, THE ZERO AND THE ONE brilliantly encapsulates the agony and the ecstasy of the search for meaning in late adolescence."—Jenny Davidson, author of The Magic Circle and Reading Style: A Life in Sentences

"THE ZERO AND THE ONE is brilliantly erudite, deeply engaging, and full of heart. Ryan Ruby has captured something surprising--the ineluctable sadness of youth."—Lauren Elkin, author of Flâneuse: Women Walk the City in Paris, New York, Tokyo, Venice, and London

"A ferocious hybrid of a book: part novel of philosophy, part thriller, completely absorbing. It's the sort of book you read in a day - reminded, between gulps, of The Secret History and The Talented Mr. Ripley - and then spend months thinking about."—Ben Dolnick, author of Zoology and At the Bottom of Everything

"THE ZERO AND THE ONE is a fast-paced, philosophical meditation on what qualifies as the worst crime one can commit."—Booklist

"This is a rare book -- a compulsively readable page-turner that is actually, unapologetically, smart."—LA Review of Books