My Seven Sons and How We Raised Each Other: (They Only Drive Me Crazy 30% of the Time) (Hardcover) 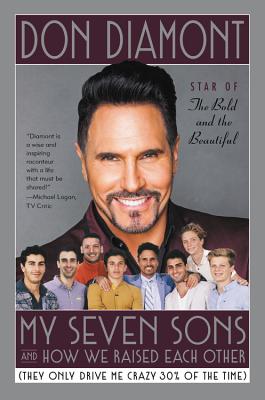 Soap star Don Diamont's most interesting storyline to date is being the real-life father and ringleader of his seven rambunctious boys.
Called a "daytime deity" by Soap Opera Digest, Don Diamont is best known as the dashing publishing titan with steel abs, "Dollar Bill Spencer," on the most-watched daytime drama in the world, The Bold and the Beautiful.

But all of that takes second place to his most important role to date: father to seven boys.

By turns hilarious and poignant, My Seven Sons and How We Raised Each Other is a family memoir for our time. Don writes with openness and courage about the ways his family came together: by marriage, divorce, the death of his sister, and marriage again. Today's blended families might look different from the households of even a few decades ago, but the first dates, first cars, busting curfew, talking back, grounding, broken hearts, laughs, tears, and the love are the same.

From his childhood growing up in LA, to his Zoolander phase as a model in both Paris and Los Angeles, to the iconic place he now occupies in daytime television, Don also gives us a glimpse into a life that at times could have been scripted for a soap opera. And, with brutal honesty, he tells of the personal devastation he suffered after the deaths of his father, brother, and sister.

My Seven Sons is required reading for everyone who is a parent, and all those who have one.

Don Diamont has garnered several Outstanding Performer acknowledgments by Soap Opera Digest and Gold Star Performance nods by Soaps In Depth magazine. Don has been involved with a variety of charitable concerns, including creating the Don Diamont/Alyssa Mazur Foundation at UCLA's MS Research and Treatment Center. He was named Ambassador of the Year by the National Multiple Sclerosis Society for his efforts. Additionally, he is a supporter of the ALS Foundation.

Don and his wife, Cindy, support PS Arts, which raises money to provide high-quality arts education to nearly 25,000 students in California's most under-served public schools. If seven sons aren't enough, Don is also dad to Tessa, his beloved Labradoodle. A soap opera heartthrob extraordinaire, Don is the only actor in daytime history to be listed in both the "50 Most Beautiful People" and "Sexiest Man Alive" issues of People magazine. He is currently starring in CBS's hit daytime drama The Bold and the Beautiful. He lives in Los Angeles, CA.

"Isn't it a bit too soon for soap heartthrob Don Diamont to be writing his memoirs? Oh, hell no! My Seven Sons is a fresh and fantastic surprise-one that delivers big laughs, wondrous adventures, and so much triumph over tragedy that it will leave you breathless. Diamont is a wise and inspiring raconteur with a life that must be shared!"—p.p1 {margin: 0.0px 0.0px 0.0px 0.0px; font: 12.0px Geneva}Michael Logan, TV Critic

"I've known Don for years, and, like millions of fans worldwide, have enjoyed him as "Dollar Bill" every day on The Bold and the Beautiful. Now, as a parent myself, it was fascinating to go on the journey behind the scenes and into his life as a devoted dad to his seven sons... and loving husband to a patient wife!"—Julie Chen, Host of The Talk and Big Brother, CBS

"The Bold and the Beautiful's Don Diamont has released a funny and poignant memoir that chronicles his life raising seven sons."—Soap Central

"As a parent myself, it was fascinating to go on the journey behind the scenes and into his life as a devoted dad to his seven sons... and loving husband to a patient wife!"—Julie Chen, The Talk