Slam-Dunk Success: Leading from Every Position on Life's Court (Paperback) 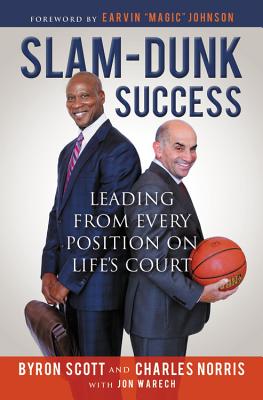 Great leadership begins with great understanding. No one knows that better than basketball legend Byron Scott and lifelong business executive Charlie Norris who, respectively, won NBA championships and resurrected multimillion-dollar corporations by being team players no matter their position. Whether it's on the basketball court, in the boardroom, or in everyday life, getting to the heads and hearts of people is paramount to getting the most out of them.

In SLAM-DUNK SUCCESS, Scott and Norris share their parallel formulas for victory and prove that, with the right tools, winning can happen anywhere. As a player Scott won three championships with the Los Angeles Lakers, and as coach he twice took the New Jersey Nets to the NBA Finals and won Coach of the Year honors with the New Orleans Hornets. With every team his role changed, but his winning mentality never faltered. As CEO of McKesson Water, Charlie Norris turned a $200 million-dollar company into a company that sold ten years later for $1.1 billion dollars and, as chairman of the board of Freshpet, he helped lead the start-up from early stage testing to become a publicly traded company with a market value of over $350 million. In each job, he led with the same amount of conviction and care.

Their book-which grew from their unlikely friendship and realization that two men from completely different backgrounds could have the same leadership ideals-breaks down their keys to motivating others, negotiating deals, and creating prosperity from scratch. Their blueprint includes lessons on listening, turning failure into learning opportunities, and delegating authority with extreme precision.

Leadership is a full-time job and Byron Scott and Charlie Norris's story is a guidebook for leaders in all fields and in any position looking to better both their careers and lives. Champions are formed when people make those around them better and this book shows how you can be a winner every day.

BYRON SCOTT is a former NBA player and coach who won three championships as a member of "Showtime" Lakers and coached the New Jersey Nets to two NBA Finals. He is now an analyst for ESPN.

CHARLES NORRIS is a former CEO and president of McKesson Water and Deer Park Spring Water. He currently has an investment portfolio of five companies where he plays an active board role, including Freshpet, where he is chairman of the board.

"Although it's common to find community at Equinox, Byron and Charles found uncommon friendship in one another. Together, they discovered parallels that exist between sports and business, making this an empowering read for anyone in a leadership role."—p.p1 {margin: 0.0px 0.0px 0.0px 0.0px; font: 10.0px Arial}span.s1 {font-kerning: none}Harvey Spevak, CEO and Partner, Equinox

"Reading this book made me feel like I was in the locker room with Coach Scott. His leadership helped me jumpstart my career and in this book you really get a play-by-play of his winning philosophy."—Kyrie Irving, Cleveland Cavaliers

"Success that looks like a slam-dunk rarely is. Byron and Charlie chronicle the strikingly similar mental attitudes, preparation, work-ethic, fortitude, failures and foibles that has led to their success in very different fields and sparked their unlikely friendship. Their stories and the lessons they draw from their personal experiences will be of value both on the court and in the corporate arena."—p.p1 {margin: 0.0px 0.0px 8.0px 0.0px; font: 11.0px Helvetica}Lena Goldberg, senior lecturer, Harvard Business School

"I had the greatest opportunity to coach Byron and I knew he'd be a great coach one day. Reading the book reaffirmed my feeling that he's a great leader and motivator who gets to the heart of what makes players tick."—p.p1 {margin: 0.0px 0.0px 0.0px 0.0px; font: 11.0px Helvetica}span.s1 {font-kerning: none}Coach Larry Brown