File Under: 13 Suspicious Incidents (All the Wrong Questions) (CD-Audio) 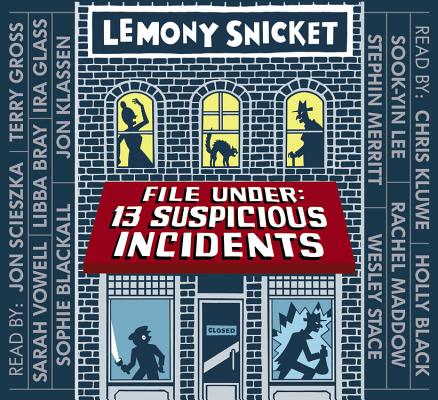 Before the Baudelaires became orphans, before he encountered A Series of Unfortunate Events, even before the invention of Netflix, Lemony Snicket was a boy discovering the mysteries of the world.

Paintings have been falling off of walls, a loud and loyal dog has gone missing, a specter has been seen walking the pier at midnight -- strange things are happening all over the town of Stain'd-By-The-Sea. Called upon to investigate thirteen suspicious incidents, young Lemony Snicket collects clues, questions witnesses, and cracks every case. Join the investigation and tackle the mysteries alongside Snicket, then turn to the back of the book to see the solution revealed.

Lemony Snicket had an unusual education and a perplexing youth and now endures a despondent adulthood. His previous published works include All the Wrong Questions, the thirteen volumes in A Series of Unfortunate Events, The Composer is Dead, and 13 Words.

Praise for "Who Could That Be at This Hour?":"A Pink Panther-esque page turner...exceptionally literary and entirely singular. Characterized by linguistic playfulness and an appreciation for the archaic, "Who Could That Be at This Hour?" is frequently laugh-out-loud hilarious...illustrations by celebrated cartoonist Seth only add to the throwback gumshoe vibe of this outrageous, long-overdue, middle-grade follow-up series from a truly beloved narrator."—Los Angeles Times

* "Will thrill fans of the author's earlier works and have even reluctant readers turning pages with the fervor of seasoned bookworms. A must-have."—School Library Journal, starred review

"Demands to be read twice: once for the laughs and the second time for the clues."—The Boston Globe