Far From You (Paperback) 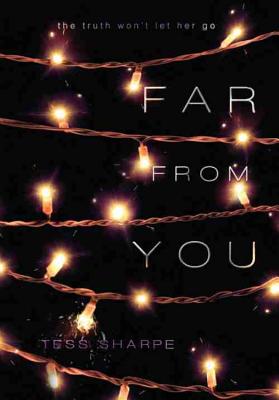 Don’t miss Tess Sharpe’s new novel, 6 Times We Almost Kissed (and One Time We Did).

The truth won't let her go.

Sophie Winters nearly died. Twice. The first time, she's fourteen, and escapes a near-fatal car accident with scars, a bum leg, and an addiction to Oxy that'll take years to kick. The second time, she's seventeen, and it's no accident. Sophie and her best friend Mina are confronted by a masked man in the woods. Sophie survives, but Mina is not so lucky. When the cops deem Mina's murder a drug deal gone wrong, casting partial blame on Sophie, no one will believe the truth: Sophie has been clean for months, and it was Mina who led her into the woods that night for a meeting shrouded in mystery. After a forced stint in rehab, Sophie returns home to a chilly new reality. Mina's brother won't speak to her, her parents fear she'll relapse, old friends have become enemies, and Sophie has to learn how to live without her other half. To make matters worse, no one is looking in the right places and Sophie must search for Mina's murderer on her own. But with every step, Sophie comes closer to revealing all: about herself, about Mina---and about the secret they shared.

Born in a mountain cabin to a punk-rocker mother, Tess Sharpe grew up in rural California. She lives deep in the backwoods with a pack of dogs and a growing colony of feral cats. You can find her on twitter @sharpegirl.

* "This beautifully realized debut delves into the emotions of a girl recovering from drug addiction and grief, all wrapped up in a solid mystery."—Kirkus Reviews, starred review

* "Sharpe creat[es] a lacerating picture of grief and regret. ...The murder mystery is compelling, and its resolution serves as a reminder that love is irrevocably tied to loss and that few people get out of it unscathed."—Bulletin of the Center for Children's Books, starred review

"This romance is full of struggle and strong emotions, likely to find an appreciable YA audience."—School Library Journal

"Sharpe's writing is beautiful and her characters are fully realized..."
—Booklist