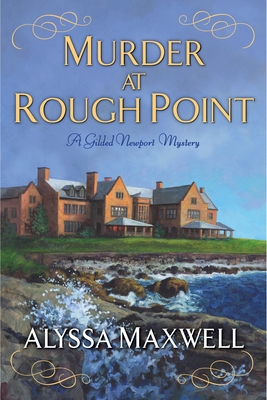 By Alyssa Maxwell
$15.95
Not Available

This is book number 4 in the A Gilded Newport Mystery series.

In glittering Newport, Rhode Island, status is everything. But despite being a poorer relation to the venerable Vanderbilts, Emma Cross has shaped her own identity—as a reporter and a sleuth.

As the nineteenth century draws to a close, Fancies and Fashion reporter Emma Cross is sent by the Newport Observer to cover an elite house party at Rough Point, a “cottage” owned by her distant cousin Frederick Vanderbilt that has been rented as an artist retreat. To her surprise, the illustrious guests include her estranged Bohemian parents—recently returned from Europe—as well as a variety of notable artists, including author Edith Wharton.

But when one of the artists is discovered dead at the bottom of a cliff, Rough Point becomes anything but a house of mirth. After a second murder, no one is above suspicion—including Emma’s parents. As Newport police detective Jesse Whyte searches for a killer, Emma tries to draw her own conclusions—with the help of Mrs. Wharton. But with so many sketchy suspects, she’ll need to canvas the crime scenes carefully, before the cunning culprit takes her out of the picture next . . .

Praise for Alyssa Maxwell and her Gilded Newport Mysteries

“Another entertaining entry in this cozy series.” —Library Journal on Murder at Beechwood

Alyssa Maxwell began a love affair with the city of Newport when visiting friends there back in her high school days. Time and again the cobbled lanes and harbor‑side, gas‑lit neighborhoods drew her to return, and on one of those later visits she met the man who would become her husband. Always a lover of history, Alyssa found that marrying into a large, generations‑old Newport family opened up an exciting new world of historical discovery. From the graveyards whose earliest markers read from the seventeenth century, to original colonial houses still lived in today, to the Newport Artillery Company whose curator for many years was her husband’s grandfather, Newport became a place of fascination and romantic charm. Today, Maxwell and her husband reside in Florida with their two adult daughters, but part of her heart remains firmly in that small New England city of great significance, a microcosm of American history spanning from before the Revolution through the Civil War, the Industrial Age, the Gilded Age, and beyond. For more info please visit www.alyssamaxwell.com.