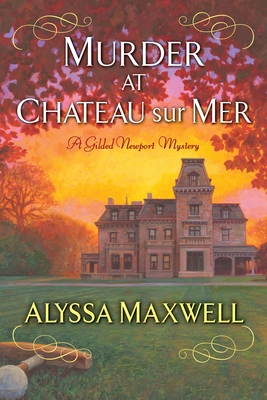 This is book number 5 in the A Gilded Newport Mystery series.

Late nineteenth-century Newport, Rhode Island, is home to some of America’s wealthiest citizens. For society reporter Emma Cross, a less well-heeled cousin to the illustrious Vanderbilts, trailing gossip and glamour will lead her straight into murder . . .

Covering a polo match for the Observer, Emma’s job is to take note of the real players off the field—Newport’s well-bred elite. But the fashionable façade is breached when a woman in gaudy clothing creates a scene demanding to speak to the wife of Senator George Wetmore—until she is escorted off the grounds by the police.

The next morning, police detective Jesse Whyte asks Emma to meet him at the Wetmores’ Bellevue Avenue home, Chateau sur Mer, where the senator’s wife, Edith, has mysteriously asked to see her. Upon entering the mansion, Emma is confronted with a crime scene—the intruder from the polo match lies dead at the foot of a grand staircase.

To avoid scandal, Edith Wetmore implores Emma to use her reporter skills and her discretion to investigate. When Emma learns the victim was a prostitute—and pregnant—she wonders if the senator was being blackmailed. As Emma peels back layers of deception and family secrets, she may have met her match in a desperate killer who will trample anyone who gets in the way . . .

Alyssa Maxwell began a love affair with the city of Newport years ago. Time and again the colonial neighborhoods and grand mansions drew her to return, and on one of those later visits she met the man who would become her husband. Always a lover of history, Maxwell found that marrying into a large, generations‑old Newport family opened up an exciting new world of historical discovery. Today, she and her husband reside in Florida, but part of her heart remains firmly in that small New England city of great historical significance. For more info please visit www.alyssamaxwell.com.