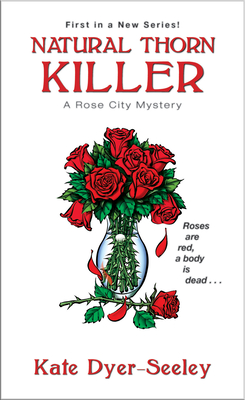 By Kate Dyer-Seeley
$8.95
Not Available

This is book number 1 in the A Rose City Mystery series.

Britta Johnston might be a late bloomer, but after leaving her deadbeat husband and dead-end job, she’s finally pursuing her artistic passion at her aunt Elin’s floral boutique, Blooma, in Portland, Oregon. It’s on the banks of the Willamette, in a quaint district of cobblestone paths and cherry trees. The wine bar featuring Pacific Northwest vintages is a tasty bonus, offering another kind of bouquet to enjoy. But things aren’t as peaceful as they look.

For one thing, someone’s been leaving dead roses around—and a sleazy real estate developer who wants the waterfront property has put a big-money offer on the table. Then, after a contentious meeting of local business owners, he’s found on the floor of the shop, with Elin’s garden shears planted in his chest. And before the police decide to pin the crime on her beloved aunt, Britta will have to find out who arranged this murder . . .

Kate Dyer-Seeley is  the author of Scene of the Climb, Slayed on the Slopes, Silenced in the Surf, First Degree Mudder, and In Cave Danger in the Pacific Northwest Mystery series, as well as the memoir Underneath the Ash. Her writing has appeared in Climbing Magazine, The Oregonian, The Columbian, Portland Family Magazine, and The Vancouver Voice. She is an active member of the Willamette Writers Association and the Pacific Northwest Writers Association. Visit her website at katedyerseeley.com.