A Sinister Service (A Lady and Lady's Maid Mystery #6) (Hardcover) 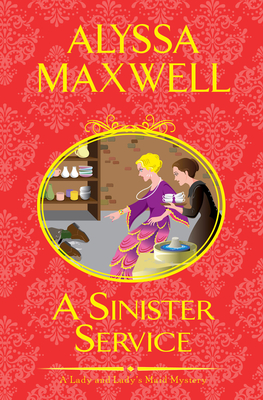 By Alyssa Maxwell
$29.12
Not Available

In the Alyssa Maxwell's sixth delightful A Lady and Lady's Maid Mystery set after World War I, a trip to Staffordshire for Lady Phoebe Renshaw and her lady's maid, Eva Huntford, leads to murder in a famed pottery works...

Following the devastation of the Great War, England's noble class takes comfort in honoring tradition. To celebrate their grandparents' wedding anniversary, Lady Phoebe Renshaw and her siblings travel to Staffordshire to commission a china service bearing the Wroxly coat of arms from the venerated Crown Lily Potteries, a favorite of Queen Mary.

The two leading designers at the illustrious china manufacturer offer competing patterns. But when one of them is found dead--his body crushed in a grinding pan and his design pattern book missing--his rival is immediately suspected. The police are also suspicious of the dead designer's resentful young son, a schoolmate of Phoebe's fifteen-year-old brother Fox. When Fox gets involved to help his friend, Phoebe begins to investigate the rival artist.

At the same time, Eva is enlisted to go undercover at the works so she can gain the confidence of the female employees, who are only allowed to paint, not design, which may have led to a grudge against the victim. Pursuing a killer who has no compunction about using a kiln as a coffin, Phoebe and Eva take their lives into their hands to discover the shattering truth...