One Taste Too Many (A Sarah Blair Mystery #1) (Mass Market) 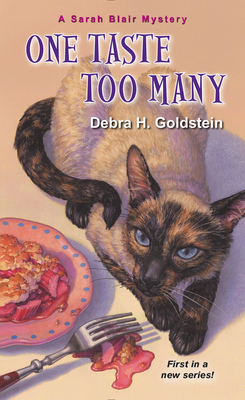 This is book number 1 in the A Sarah Blair Mystery series.

For culinary challenged Sarah Blair, there’s only one thing scarier than cooking from scratch—murder!

Married at eighteen, divorced at twenty‑eight, Sarah Blair reluctantly swaps her luxury lifestyle for a cramped studio apartment and a law firm receptionist job in the tired hometown she never left. With nothing much to show for the last decade but her feisty Siamese cat, RahRah, and some clumsy domestic skills, she’s the polar opposite of her bubbly twin, Emily—an ambitious chef determined to take her culinary ambitions to the top at a local gourmet restaurant . . .

Sarah knew starting over would be messy. But things fall apart completely when her ex drops dead, seemingly poisoned by Emily’s award-winning rhubarb crisp. Now, with RahRah wanted by the woman who broke up her marriage and Emily wanted by the police for murder, Sarah needs to figure out the right recipe to crack the case before time runs out. Unfortunately, for a gal whose idea of good china is floral paper plates, catching the real killer and living to tell about it could mean facing a fate worse than death—being in the kitchen!

Debra H. Goldstein is also the author of Should Have Played Poker, a Carrie Martin and the Mah Jongg Players Mystery and the 2012 IPPY Award-winning Maze in Blue, a mystery set on the University of Michigan’s campus. Her short stories and essays have been published in numerous periodicals and anthologies, including Alfred Hitchcock Mystery Magazine. Debra serves on numerous civic boards in Birmingham, Alabama, as well as the Sisters in Crime (national) and Guppy Chapter boards. She is an MWA member.

Advance praise for One Taste Too Many

“Debra Goldstein whets our appetite for murder in this series debut.  Scarf down a full serving of this tasty mystery as soon as you can.”
—Maddie Day, bestselling author of the Country Store Mysteries

“A cozy mystery loaded with humor and heart.”
—Linda Rodriguez, author of Every Hidden Fear

“Twins, murder, and mouthwatering descriptions of delicious food. One Taste Too Many is a page-turner debut of a cozy mystery that leaves you wanting more.”
—Barbara Ross, author of Steamed Open