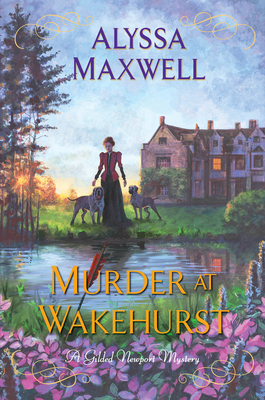 This is book number 9 in the A Gilded Newport Mystery series.

In the autumnal chill of Newport, Rhode Island, at the close of the nineteenth century, journalist Emma Cross discovers an instance of cold-blooded murder on the grounds of a mansion...

Following the death of her uncle, Cornelius Vanderbilt, in September 1899, a somber Emma is in no mood for one of Newport's extravagant parties. But to keep Vanderbilt's reckless son Neily out of trouble, she agrees to accompany him to an Elizabethan fete on the lavish grounds of Wakehurst, the Ochre Point "cottage" modeled after an English palace, owned by Anglophile James Van Alen.

Held in Wakehurst's English-style gardens, the festivities will include a swordplay demonstration, an archery competition, scenes from Shakespeare's plays, and even a joust. As Emma wanders the grounds distracted by grief, she overhears a fierce argument between a man and a woman behind a tall hedge. As the joust begins, she's drawn by the barking of Van Alen's dogs and finds a man on the ground, an arrow through his chest.

The victim is one of the 400's most influential members, Judge Clayton Schuyler. Could one of the countless criminals he'd imprisoned over the years have returned to seek revenge--or could one of his own family members have targeted him? With the help of her beau Derrick Andrews and Detective Jesse Whyte, Emma begins to learn the judge was not the straight arrow he appeared to be. As their investigation leads them in ever-widening circles, Emma will have to score a bull's eye to stop the killer from taking another life...

“The sense of place and history is palpable and the inclusion of historical figures and the intricate crimes make this a very entertaining, worthwhile series.”
—The New York Public Library on the Gilded Newport Mystery series

​“Numerous plot twists, a richly described 1898 setting, details of the lives and times of the rich, and a principled, smart main character who is making her own way in the world distinguish this entry in the series. It will appeal to those who enjoy historical mysteries with strong, ahead-of-their-times female characters.”
—Booklist on Murder at Crossways

“Alyssa Maxwell entertains readers once again…a light, summer-time read perfect for the beach.
—Newport This Week on Murder at Crossways

“The setting and historical details are vibrant and colorful, especially real-life figure Mamie Fish—a grand dame in every sense of the phrase—and the glittering fashions and homes of the Newport rich. The Harvest Festival itself is more than worth the price of admission.”
—Criminal Elementon Murder at Crossways

“Maxwell gives an honest portrayal of the Gilded Age, its pretentious high society, and the second-class status of women. Using just the right period details, Maxwell puts the reader into the story without bogging down the unfolding murder mystery. Fans of the series will enjoy this caper.”
—Historical Novel Societyon Murder at Crossways

“Plenty of red herrings and an intimate look at the world of the wealthy and famous make for a rich broth of a mystery.”
—Kirkus Reviews on Murder at Ochre Court

“A sweet, delightful mystery, which is sure to appeal to historical-fiction and mystery readers alike.”
—Foreword Reviews on A Pinch of Poison

“The characters are fun, the dialogue is both charming and intelligent, but the scenery that makes up that extravagant time period in New England really is the gem in these glorious tales.”
—Suspense Magazine on Murder at Rough Point

“Several cuts above the usual feisty heroine tale; it provides a good picture of life among the privileged—and not-so-privileged—classes in Gilded Newport.”
—San Jose Mercury News on Murder at Beechwood