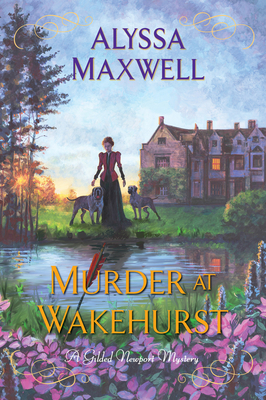 This is book number 9 in the A Gilded Newport Mystery series.

In the ninth installment of the glittering Gilded Newport Mystery series from Alyssa Maxwell, during the autumnal chill of Newport, Rhode Island at the close of the nineteenth century, journalist Emma Cross discovers an instance of cold-blooded murder on the grounds of Wakehurst Mansion…

Following the death of her uncle, Cornelius Vanderbilt, in September 1899, a somber Emma is in no mood for one of Newport’s extravagant parties. But to keep Vanderbilt’s reckless son Neily out of trouble, she agrees to accompany him to an Elizabethan fête on the lavish grounds of Wakehurst, the Ochre Point “cottage” modeled after an English palace, owned by Anglophile James Van Alen.

The festivities include a swordplay demonstration, an archery competition, scenes from Shakespeare’s plays, and even a joust. As Emma wanders the grounds, she overhears a fierce argument between a man and a woman behind a tall hedge. As the joust begins, she’s drawn by the barking of Van Alen’s dogs and finds a man on the ground, an arrow through his chest. The victim is one of the 400’s most influential members, Judge Clayton Schuyler. With the help of her beau Derrick Andrews and Detective Jesse Whyte, Emma begins to learn the judge was not the straight arrow he appeared to be. As their investigation leads them in ever-widening circles, Emma will have to stop the killer from taking another life . . .

Alyssa Maxwell is the acclaimed author of the Gilded Newport Mysteries and the Lady and Lady's Maid Mystery series. She knew from a young age that she wanted to write novels. Growing up in New England and traveling to Great Britain fueled a passion for history, while a love of puzzles of all kinds drew her to the mystery genre. She and her husband reside in Florida, where she loves to watch BBC productions, sip tea in the afternoons, and delve into the past. You can learn more about Alyssa and her books at AlyssaMaxwell.com.