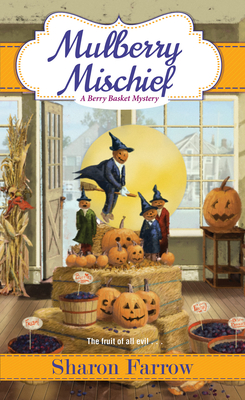 By Sharon Farrow
$8.95
Not Available

This is book number 4 in the A Berry Basket Mystery series.

Autumn has arrived on the shores of Lake Michigan, but Marlee Jacob, proprietor of The Berry Basket, is feeling a chill for other reasons …

With the Harvest Health Fair in full swing, Marlee makes sure to stock up on elderberry products for cold and flu season. But this year there's also a run on mulberry when an eccentric customer wants to use the dried berries to ward off evil forces. True, it's almost Halloween, but something else seems to be spooking Leticia the Lake Lady, Oriole Point's oddest resident. She believes someone plans to kill her—and the ghost. Only mulberries can protect them. Marlee doesn't take her fears seriously until a man named Felix Bonaventure arrives in the village, asking questions about a mysterious woman.

The next day, Marlee finds Bonaventure dead on Leticia's property—shot through the heart with an arrow made of mulberry wood. And Leticia has disappeared. Marlee soon learns the Lake Lady has a deadly past that is connected to the famous Sable family who are in town for the health fair. A bunch of clues start to come together—and figuring out what's going on puts Marlee in a real jam …

Sharon Farrow is also the co-author of the Agatha nominated Eliza Doolittle and Henry Higgins Mysteries written under the joint pseudonym D.E. Ireland. A freelance writer since her twenties, she has been published in mystery, fantasy, and romance; one of her short stories has been optioned for film. Sharon currently lives along the beautiful Lake Michigan shoreline where the Berry Basket series is set. Visit her online at sharonfarrowauthor.com, on Facebook @SharonFarrowAuthor, or Twitter @SharonFarrowBB.