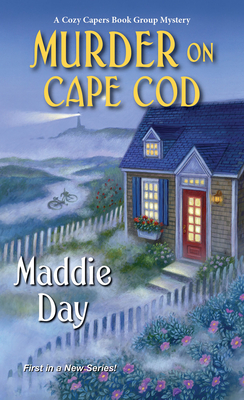 This is book number 1 in the A Cozy Capers Book Group Mystery series.

A Cape Cod shop owner and her book club must find a crafty killer in this charming new series from the Agatha-nominated author of the Country Store Mystery series.

Summer is busy season for Mackenzie “Mac” Almeida’s bicycle shop, nestled in the quaint, seaside hamlet of Westham, Massachusetts. She’s expecting an influx of tourists at Mac’s Bikes; instead she discovers the body of Jake Lacey. Mac can’t imagine anyone stabbing the down-on-his-luck handyman. However, the authorities seem to think Mac is a strong suspect after she was spotted arguing with Jake just hours before his death. Mac knows she didn’t do it, but she does recognize the weapon—her brother Derrick’s fishing knife.

Mac’s only experience with murder investigations is limited to the cozy mysteries she reads with her local book group, the Cozy Capers. So to clear her name—and maybe her brother’s too—Mac will have to summon help from her Cozy Capers co-investigators and a library’s worth of detectives’ tips and tricks. For a small town, Westham is teeming with possible killers, and this is one mystery where Mac is hoping for anything but a surprise ending…

Maddie Day is a talented amateur chef and holds a Ph.D. in Linguistics from Indiana University. An Agatha-nominated and Amazon-bestselling author, she is a member of Sisters in Crime and Mystery Writers of America and also writes award-winning short crime fiction, which has appeared in a number of juried anthologies. She lives with her beau and three cats in Massachusetts, where she's currently working on her next Country Store mystery when she isn't cooking up something delectable in the kitchen.