Murder Comes to Call (A Beryl and Edwina Mystery #4) (Hardcover) 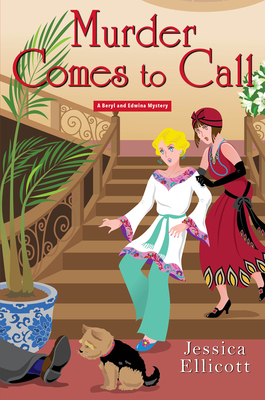 This is book number 4 in the A Beryl and Edwina Mystery series.

The lean years following World War I can lead to desperate acts--even in the quiet English village of Walmsley Parva. When a series of burglaries seems to culminate in murder, brash American Beryl Helliwell and proper, buttoned up Brit Edwina Davenport (and her dog, Crumpet) are eager to solve the case in Jessica Ellicott's fourth Beryl and Edwina Mystery...

World-renowned adventuress Beryl Helliwell cited for "reckless" motoring? Why, the very idea! Constable Gibbs just has it in for her. The solution? Charm the magistrate, of course. But days after Beryl's appearance before the bench, she and Edwina pay a visit to the magistrate only to find his home ransacked and the man himself lying dead at the bottom of a grand staircase.

Given the state of the house, his death appears to be connected to a rash of robberies in the village. Declan O'Shea, the handsome helper Beryl hired to assist their aged gardener Simpkins, falls under suspicion after having had his own run-in with the magistrate--but mostly, Beryl believes, because he's Irish.

While unofficially looking into the magistrate's murder, the ladies are hired in their official capacity as private inquiry agents to find census reports that have gone missing. Is someone trying to hide something from the census takers--and could that theft have anything to do with the magistrate's death? Beryl and Edwina are once again in fine form as they engage in a little reckless sleuthing to bring these assorted mysteries to a speedy conclusion...

Jessica Ellicott is the author of the Beryl & Edwina Mystery series, as well as the Change of Fortune mysteries under the name Jessica Estevao and the bestselling Sugar Grove Mysteries as Daphne du Maurier Award-winning author Jessie Crockett. A member of Wicked Authors, Sisters in Crime, and ITW, she lives in northern New England where she obsessively knits wool socks and enthusiastically speaks Portuguese with a shocking disregard for the rules of grammar. Please visit her online at JessicaEllicott.com.