Murder at the Mena House (A Jane Wunderly Mystery #1) (Paperback) 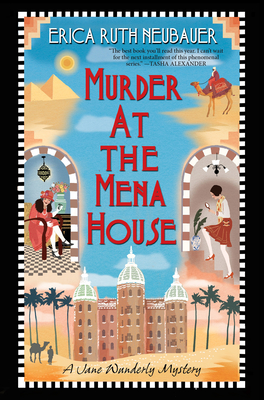 This is book number 1 in the A Jane Wunderly Mystery series.

Traveling Egypt as a companion to her wealthy aunt in the years after WWI, a young woman accused of murdering a flapper at the luxurious Mena House hotel must investigate her fellow occupants to clear her name. The young couple who work in vaudeville, the playboy Egyptian, the Australian hotel doctor, the young woman cozied up to her aunt, even the handsome and mysterious Redvers--all seem to have something to hide. With its exotic, real-life setting and intriguing cast of suspects, Erica Ruth Neubauer's historical mystery debut is perfect for fans of Agatha Christie and Rhys Bowen.

Well-heeled travelers from around the world flock to the Mena House Hotel--an exotic gem in the heart of Cairo where cocktails flow, adventure dispels the aftershocks of World War I, and deadly dangers wait in the shadows...

Egypt, 1926. Fiercely independent American Jane Wunderly has made up her mind: she won't be swept off her feet on a trip abroad. Despite her Aunt Millie's best efforts at meddling with her love life, the young widow would rather gaze at the Great Pyramids of Giza than into the eyes of a dashing stranger. Yet Jane's plans to remain cool and indifferent become ancient history in the company of Mr. Redvers, a roguish banker she can't quite figure out...

While the Mena House has its share of charming guests, Anna Stainton isn't one of them. The beautiful socialite makes it clear that she won't share the spotlight with anyone--especially Jane. But Jane soon becomes the center of attention when she's the one standing over her unintentional rival's dead body.

Now, with her innocence at stake in a foreign country, Jane must determine who can be trusted, and who had motive to commit a brutal murder. Between Aunt Millie's unusual new acquaintances, a smarmy playboy with an off-putting smile, and the enigmatic Mr. Redvers, someone has too many secrets. Can Jane excavate the horrible truth before her future falls to ruin in Cairo...and the body count rises like the desert heat?

Erica Ruth Neubauer spent eleven years in the military, nearly two as a Maryland police officer, and one as a high school English teacher, before finding her way as a writer. She has been a reviewer of mysteries and crime fiction for publications such as Publishers Weekly and Mystery Scene Magazine for several years, and she’s a member of Sisters in Crime and Mystery Writers of America. Erica Ruth lives in Milwaukee, WI.