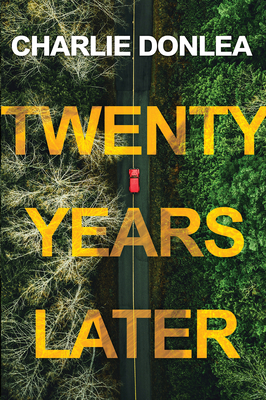 By Charlie Donlea
$27.00
Not Available

Fans of Verity by Colleen Hoover won’t want to miss this thrilling new suspense novel from the #1 internationally bestselling author of The Girl Who Was Taken! Hiding her own dark past in plain sight, a TV reporter is determined to uncover the truth behind a gruesome murder decades after the investigation was abandoned. But TWENTY YEARS LATER, to understand the present, you need to listen to the past…

Avery Mason, host of American Events, knows the subjects that grab a TV audience’s attention. Her latest story—a murder mystery laced with kinky sex, tragedy, and betrayal—is guaranteed to be ratings gold. New DNA technology has allowed the New York medical examiner’s office to make its first successful identification of a 9/11 victim in years. The twist: the victim, Victoria Ford, had been accused of the gruesome murder of her married lover. In a chilling last phone call to her sister, Victoria begged her to prove her innocence.

Emma Kind has waited twenty years to put her sister to rest, but closure won’t be complete until she can clear Victoria’s name. Alone she’s had no luck, but she’s convinced that Avery’s connections and fame will help. Avery, hoping to negotiate a more lucrative network contract, goes into investigative overdrive. Victoria had been having an affair with a successful novelist, found hanging from the balcony of his Catskills mansion. The rope, the bedroom, and the entire crime scene was covered in Victoria’s DNA.

But the twisted puzzle of Victoria’s private life is just the beginning. And what Avery doesn't realize is that there are other players in the game who are interested in Avery’s own secret past—one she has kept hidden from both the network executives and her television audience. A secret she thought was dead and buried . . .

Accused of a brutal murder, Victoria Ford made a final chilling call from the North Tower on the morning of 9/11. Twenty years ago, no one listened. Today, you will.

“An entertaining thriller…surprises lurking around every corner.” —Kirkus Reviews

Charlie Donlea is the critically acclaimed, USA Today, Indiebound and #1 internationally bestselling author of Summit Lake, The Girl Who Was Taken, Don't Believe It, Some Choose Darkness, The Suicide House, and Twenty Years Later. Published in nearly 30 countries and translated into more than a dozen languages, Donlea has been praised for his "soaring pace, teasing plot twists" (BookPage) and talent for writing an ending that "makes your jaw drop" (The New York Times Book Review). He was born and raised in Chicago, where he continues to live with his wife and two children. Visit him online at CharlieDonlea.com.

“An entertaining thriller…surprises lurking around every corner.”
—Kirkus Reviews

“A great plot that incorporates family, lifelong friendship, betrayal, and the specter of 9/11…deep with several sub-plots that keep you guessing about how it will all come together. The ending is very unexpected on several fronts. Any good crime and mystery fan will enjoy this book.”
—J. Willey (Fiction Addiction) for The Southern Booksellers Review

“[Plot lines] merge seamlessly into a surprise ending that I didn’t see coming. Author Charlie Donlea has an easy readable style and skillfully adds depth and intrigue to this enjoyable thriller.”
—Mystery Scene

“Solid twists and turns.”
—SpeakingOf.org, Most Anticipated Books of the Month

“A bestselling author’s grisly murder in 2001 opens this entertaining literary thriller before it makes its way to the present.”
Everything Zoomer