Those Empty Eyes: A Chilling Novel of Suspense with a Shocking Twist (Hardcover) 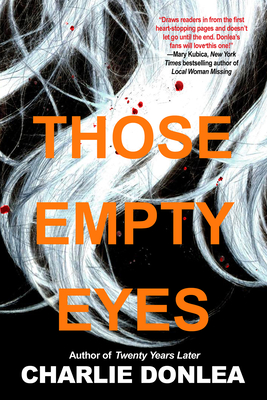 Ten years after she was exonerated for the slaughter of her family, the girl the tabloids called “Empty Eyes” is the only one looking for the truth in this propulsive thriller from #1 internationally bestselling author Charlie Donlea.

“Excellent…Engrossing…This searing look at the legal system, entitlement, and exploitation is not to be missed.” – Publishers Weekly, STARRED review

Alex Armstrong has changed everything about herself—her name, her appearance, her backstory. She’s no longer the terrified teenager a rapt audience saw on television, emerging in handcuffs from the quiet suburban home the night her family was massacred. That girl, Alexandra Quinlan, nicknamed Empty Eyes by the media, was accused of the killings, fought to clear her name, and later took the stand during her highly publicized defamation lawsuit that captured the attention of the nation.

It’s been ten years since, and Alex hasn’t stopped searching for answers about the night her family was killed, even as she continues to hide her real identity from true crime fanatics and grasping reporters still desperate to locate her. As a legal investigator, she works tirelessly to secure justice for others, too. People like Matthew Claymore, who’s under suspicion in the disappearance of his girlfriend, a student journalist named Laura McAllister.

Laura was about to break a major story about rape and cover-ups on her college campus. Alex believes Matthew is innocent, and unearths stunning revelations about the university’s faculty, fraternity members, and powerful parents willing to do anything to protect their children.

Most shocking of all—as Alex digs into Laura’s disappearance, she realizes there are unexpected connections to the murder of her own family. For as different as the crimes may seem, they each hinge on one sinister truth: no one is quite who they seem to be . . .

Charlie Donlea is the critically acclaimed, USA Today, Indiebound and #1 internationally bestselling author of Summit Lake,  The Girl Who Was Taken, Don't Believe It, Some Choose Darkness, The Suicide House, and Twenty Years Later. Published in  nearly 30 countries and translated into more than a dozen languages, Donlea has been praised for his "soaring pace, teasing plot  twists" (BookPage) and talent for writing an ending that "makes your jaw drop" (The New York Times Book Review). He was born  and raised in Chicago, where he continues to live with his wife and two children. Visit him online at CharlieDonlea.com.

Early Praise for THOSE EMPTY EYES:

"In this ambitious thriller from one of my favorites, Charlie Donlea weaves together seemingly separate mysteries in smart and completely unexpected ways, proving his finesse as a writer. Those Empty Eyes draws readers in from the first heart-stopping pages and doesn't let go until the end. Donlea's fans will love this one!" —Mary Kubica, New York Times bestselling author of Local Woman Missing

“An exciting debut, with all the right touches, captivating from the first page to the last.” —Steve Berry, New York Times bestselling author on Summit Lake

"A perfectly executed and entirely satisfying read, Don't Believe It is a gripping thriller that will blow readers away, from the first page right up to the very last words. Charlie Donlea's best book yet!" —Mary Kubica, New York Times bestselling author of The Good Girl

“There are a lot of threads in this plot, but Donlea weaves it all together really well…Twenty Years Later is a fast-paced read with just enough depth to keep you invested in what’s going on. If you’re in a reading rut, this is a great rut buster!” —Jeremy Anderberg, Read More Books Substack on Twenty Years Later

“An entertaining thriller…surprises lurking around every corner.” —Kirkus Reviews on Twenty Years Later

“Probably the most complex and morally satisfying novel that Donlea has written thus far. Here, he deftly utilizes 9/11 to pinpoint a moment in time that is necessary to the plot while not in any way using the tragedy to manipulate the feelings of readers…Donlea subtly moves away from the 9/11 tragedy and makes his story more about the present-day characters as they battle to find the truth through a sea of lies and false accusations.” —Bookreporter on Twenty Years Later

“Gripping...the book's real strength is the idiosyncratic Rory, who suffers from OCD and is on the autism spectrum, a deeply developed character readers can't help rooting for. Hopefully, she'll be back soon.” —Publishers Weekly, Best Books of Summer on The Suicide House

"Charlie Donlea is a superb psychological suspense writer...the book has a fast-paced plot and main characters unlike any typically found in this genre." —Seattle Book Review on The Suicide House

"Part 1970s serial-killer thriller and part contemporary Chicago crime novel, this deceptively quick read has something for everyone." —Booklist on Some Choose Darkness

"In Donlea's skillful hands, this story of obsession, murder, and the search for truth is both a compassionate character study and a compelling thriller." —Kirkus Reviews on Some Choose Darkness

"You can't blame Charlie Donlea if the ending of his novel makes your jaw drop. The title alone Don't Believe It is fair warning that his characters are no more to be trusted than are our initial impressions of them." —The New York Times Book Review on Don't Believe It

"Don't Believe It displays excellent craftsmanship, from the way sentences are constructed to the serpentine plot. The prose sings. Sentences are short and punchy. Word choices are specific and impeccable. The story captivates. The central mystery unfurls in layer after layer of falsehoods and deception. It's easy to get hooked on the book's heady cocktail of highly rated television and high stakes subterfuge." —ForeWord Reviews

"[A] fast moving page-turner...Donlea skillfully maximizes suspense by juggling narrators and time." —Publishers Weekly on The Girl Who Was Taken

"Donlea's sophomore effort is solid. He effectively tells the story using shifts in time, and...keeps the reader guessing and second guessing until the end, thanks to an expertly crafted abundance of potential suspects. For fans of medical suspense and forensic thrillers, especially those who like morgue scenes in television crime shows." —Library Journal on The Girl Who was Taken

"If you're looking for a gripping thriller that will give you the chills in the heat of summer, you'll love Some Choose Darkness." —SheReads, Best Books of Summer

"With a soaring pace and teasing plot twists, Charlie Donlea's debut mystery is like a cool drink of water with a twist of lemon. It's refreshing to find a book that has such a well developed plot and excellent writing to back it up." —BookPage on Summit Lake