The Plum Tree: An Emotional and Heartbreaking Novel of WW2 Germany and the Holocaust (Paperback) 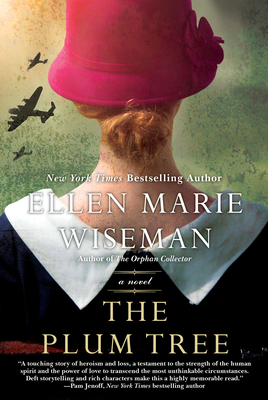 "A  touching story of heroism and loss, a testament to the strength of the human spirit and the power of love to transcend the most unthinkable circumstances."
—Pam Jenoff, New York Times bestselling author of The Lost Girls of Paris

From the internationally bestselling author of The Orphan Collector comes a haunting and lyrical tale of love and humanity in a time of unthinkable horror. The debut novel from a powerful voice in historical fiction, this resonant and courageous saga of a young German woman during World War II and the Holocaust is a must-read for fans of The Tattooist of Auschwitz and The Alice Network.

“Bloom where you're planted," is the advice Christine Bölz receives from her beloved Oma. But seventeen-year-old domestic Christine knows there is a whole world waiting beyond her small German village. It's a world she's begun to glimpse through music, books—and through Isaac Bauerman, the cultured son of the wealthy Jewish family she works for.

Yet the future she and Isaac dream of sharing faces greater challenges than their difference in stations. In the fall of 1938, Germany is changing rapidly under Hitler's regime. Anti-Jewish posters are everywhere, dissenting talk is silenced, and a new law forbids Christine from returning to her job—and from having any relationship with Isaac. In the months and years that follow, Christine will confront the Gestapo's wrath and the horrors of Dachau, desperate to be with the man she loves, to survive—and finally, to speak out.

Set against the backdrop of the German homefront, this is an unforgettable novel of courage and resolve, of the inhumanity of war, and the heartbreak and hope left in its wake.

"A haunting and beautiful debut novel."
—Anna Jean Mayhew, author of The Dry Grass of August

"Ellen Marie Wiseman boldly explores the complexities of the Holocaust. This novel is at times painful, but it is also a satisfying love story set against the backdrop of one of the most difficult times in human history."
—T. Greenwood, author of Keeping Lucy

Ellen Marie Wiseman is the New York Times bestselling author of highly acclaimed historical fiction novels The Orphan Collector, What She Left Behind, The Plum Tree, Coal River and The Life She Was Given, which was a Great Group Reads selection of the Women’s National Book Association and National Reading Group Month. Born and raised in Three Mile Bay, a tiny hamlet in Northern New York, she’s a first-generation German American who discovered her love of reading and writing while attending first grade in one of the last one-room schoolhouses in New York State. Since then, her novels have been translated into eighteen languages and published worldwide. A mother of two, Ellen lives on the shores of Lake Ontario with her husband and dogs. She can be found online at: EllenMarieWiseman.com

"A  touching story of heroism and loss, a testament to the strength of the human spirit and the power of love to transcend the most unthinkable circumstances. Deft storytelling and rich characters make this a highly memorable read and a worthy addition to the narratives of the Holocaust and Second World War."
—Pam Jenoff, author of The Ambassador's Daughter

“Ellen Marie Wiseman weaves a story of intrigue, terror, and love from a perspective not often seen in Holocaust novels.”
—Jewish Book World