What She Left Behind: A Haunting and Heartbreaking Story of 1920s Historical Fiction (Paperback) 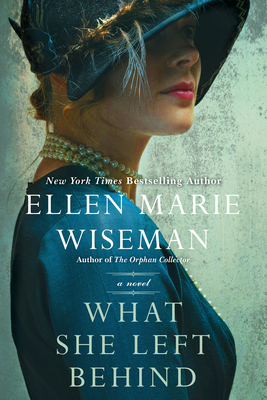 Half a million copies sold!

The breakout novel from the New York Times bestselling author of The Orphan Collector, What She Left Behind weaves together riveting stories of past and present, exploring the strength of women in two different times as they face adversity in two very different ways. Go inside the horrifying walls of a 1920s New York asylum as a wrongly imprisoned woman fights for what is most important to her—and meet the young woman confronting the pain and mystery of her own family’s mental illness two generations later.

Ten years ago, Izzy Stone’s mother fatally shot her father while he slept. Devastated by her mother’s apparent insanity, Izzy, now seventeen, refuses to visit her in prison. But her new foster parents, employees at the local museum, have enlisted Izzy’s help in cataloging items at a long-shuttered state asylum. There, amid piles of abandoned belongings, Izzy discovers a stack of unopened letters, a decades-old journal, and a window into her own past.

Young flapper and suffragette Clara Cartwright is caught between her overbearing parents and her desire to be a modern woman.  Furious when she rejects an arranged marriage, instead finding love with an Italian Immigrant, Clara’s father sends her to a genteel home for nervous invalids. But when his fortune is lost in the stock market crash of 1929, he can no longer afford her care—and Clara is committed to the public asylum.

Even as Izzy deals with the challenges of yet another new beginning, Clara’s story keeps drawing her into the past. If Clara was never really mentally ill, could something else explain her own mother’s violent act? Piecing together Clara’s fate compels Izzy to re-examine her own choices—with shocking and unexpected results.

“Screams with authenticity, depth, and understanding.”
—The New York Journal of Books

“A real page turner…will appeal to all readers of fiction.”
—The Historical Novels Review

“Will both haunt and inspire you… a moving, and at times chilling story that totally endears you to her characters.”
—SpaWeek

Ellen Marie Wiseman is the New York Times bestselling author of highly acclaimed historical fiction novels The Orphan Collector, What She Left Behind, The Plum Tree, Coal River and The Life She Was Given, which was a Great Group Reads selection of the Women’s National Book Association and National Reading Group Month. Born and raised in Three Mile Bay, a tiny hamlet in Northern New York, she’s a first-generation German American who discovered her love of reading and writing while attending first grade in one of the last one-room schoolhouses in New York State. Since then, her novels have been translated into eighteen languages and published worldwide. A mother of two, Ellen lives on the shores of Lake Ontario with her husband and dogs. She can be found online at: EllenMarieWiseman.com

“What She Left Behind screams with authenticity, depth, and understanding.”
—The New York Journal of Books

“Wiseman does an excellent job of conveying the horrifying methods employed to cure the mentally ill…What She Left Behind is a real page turner and will appeal to all readers of fiction, though the subject matter is not for the faint of heart.”
—The Historical Novels Review

“This amazing book tells the stories of two women divided by many decades, both facing overwhelming odds. The stories are told in alternating chapters, but these stories, despite their great differences, have similarities and are destined to come together. A great read!”
—The San Francisco Book Review

“Here’s a little book that’s full of fear. Just as the night monsters in Mayhem rouse an atavistic terror that we moderns can’t seem to shake, so does the symbolism in Ellen Marie Wiseman’s, What She Left Behind. This time, it’s the insane asylum, the lunatic bin and all the other politically incorrect names for the creepy facilities that housed the poor patients of another era.”
—The Toronto Star

“Finding out how both Izzy and Clara’s stories unfold and eventually connect will both haunt and inspire you…Wiseman paints a moving, and at times chilling story that totally endears you to her characters. What She Left Behind evocatively portrays that what it takes, sometimes, to know and understand oneself, is to understand fully somebody else.”
—SpaWeek

“Wiseman deftly alternates between Claire and Izzy, teasing out their stories and ending each chapter at just the right point to maintain a thriving sense of mystery and suspense…a valuable addition to most schools and public libraries.”
—VOYA Magazine

“Give this to students interested in history, psychology, and a great coming-of-age story.”
—School Library Journal