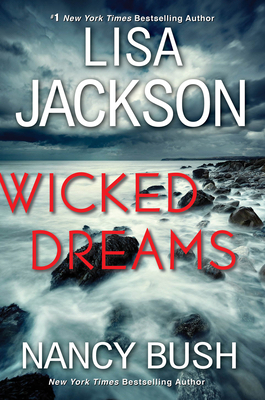 This is book number 5 in the The Colony series.

For the first time in nearly a decade, New York Times bestselling Sisters of Suspense Lisa Jackson and Nancy Bush  return to Siren Song, an isolated island tucked between the mountains and the sea off the wild Oregon coast. Some people call it The Colony. Others whisper it’s a cult. For a group of women with extraordinary gifts, it’s both home and refuge. Until evil returns to burn it all down…

The note pinned to the dead body found on the remote beach has no name, just Ravinia Rutledge’s phone number and the words “Next of Kin.” Ravinia insists she doesn’t recognize the man on the mortuary slab, but she suspects Detective Nev Rhodes doesn’t believe her. He can tell that she’s one of them—the Siren Song women.

Five years after moving away from The Colony, Ravinia has carved out a life as a private investigator whose specialty is helping others locate their missing loved ones. Yet sometimes, it’s better if the missing are never found. “Good Time Charlie” is the name given to a monster from her past, a man whom she and her sisters hoped was gone forever. But the dead man on the beach is a sign that Charlie has merely been waiting, preparing to fulfill his mission to rid the world of the Siren Song women—and anyone else who gets in his way.

Rhodes has his own reasons for being fascinated with The Colony and its surroundings—a place marked by unexplained deaths and tragedies. Rhodes plays by the rules, but there are forces at work here that defy notions of law and order. And despite Ravinia’s reluctance to team up with Nev, it’s the only way to stop an adversary determined to see that each and every member of The Colony will die at his hands . . .

“The action picks up and builds to a fiery conclusion.” –Publishers Weekly

Lisa Jackson is the #1 New York Times bestselling author of over ninety-five novels, including Liar, Liar, You Will Pay, After She's Gone, Deserves to Die, Running Scared, and Shiver. She is also the co-author of One Last Breath, Last Girl Standing and the Colony Series, written with her sister and bestselling author Nancy Bush, as well as the collaborative novels Sinister and Ominous, written with Nancy Bush and Rosalind Noonan. There are over thirty million copies of her novels in print and her writing has been translated into twenty languages. She lives with her family and beloved dogs in the Pacific Northwest. Readers can visit her online at LisaJackson.com and find her on Facebook.

Nancy Bush is the New York Times and USA Today bestselling author of over two dozen romantic suspense novels, including Bad Things, Jealousy, and The Rafferty Family series, starting with Nowhere to Run. Along with her sister, bestselling author Lisa Jackson, she co-wrote Last Girl Standing, One Last Breath, and the Colony series, and she is the co-author of Sinister and Ominous, written with Lisa Jackson and New York Times bestselling author Rosalind Noonan. She originally started writing as a young mother, beginning with historical and contemporary romances, and later went on to develop her craft as a staff writer for ABC's daytime drama, All My Children. She now writes romantic suspense full-time and lives with her family in the Pacific Northwest. Readers can visit her online at NancyBush.net.

Praise for The Colony Series by Lisa Jackson and Nancy Bush

“Superb…a masterpiece of romantic suspense with enough twists and turns to keep the reader eagerly anticipating the breathtaking conclusion.” —Publishers Weekly, STARRED REVIEW on Something Wicked

“A chilling, fiendishly twisted thriller.” —The Ashley News Observer on Something Wicked

“Definitely one you don’t want to read alone at night.” —Library Journal on Wicked Lies

“Sisters Jackson and Bush craftily combine suspense with the paranormal in this rich sequel to 2009’s bestselling Wicked Game…The affable protagonists maintain their individual identities as their romance sizzles to life, and several subplots add depth to this somewhat lengthy but deftly plotted and enticing read.” —Publishers Weekly on Wicked Lies