Murder at the Elms (A Gilded Newport Mystery #11) (Hardcover) 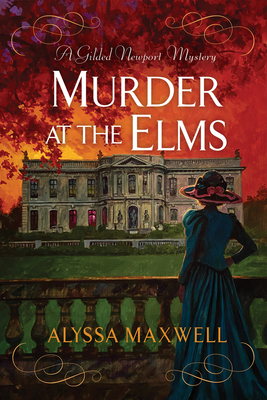 This is book number 11 in the A Gilded Newport Mystery series.

For fans of HBO’s The Gilded Age, the glorious mansions of Newport house many mysteries—murder, theft, scandal—and no one is more adept at solving them than reporter Emma Andrews . . .

1901: Back from their honeymoon in Italy, Emma and Derrick are adapting to married life as they return to their duties at their jointly owned newspaper, the Newport Messenger. The Elms, coal baron Edward Berwind’s newly completed Bellevue Avenue estate, is newsworthy for two reasons: A modern mansion for the new century, it is one of the first homes in America to be wired for electricity with no backup power system, generated by coal from Berwind’s own mines. And their servants—with a single exception—have all gone on strike to protest their working conditions. Summarily dismissing and replacing his staff with cool and callous efficiency, Berwind throws a grand party to showcase the marvels of his new “cottage.”

Emma and Derrick are invited to the fete, which culminates not only in a fabulous musicale but an unforeseen tragedy—a chambermaid is found dead in the coal tunnel. In short order, it is also discovered that a guest’s diamond necklace is missing and a laborer has disappeared.

Detective Jesse Whyte entreats Emma and Derrick to help with the investigation and determine whether the murdered maid and stolen necklace are connected. As the dark deeds cast a shadow over the blazing mansion, it’s up to Emma to shine a light on the culprit . . .

Alyssa Maxwell is the acclaimed author of the Gilded Newport Mysteries and the Lady and Lady’s Maid Mystery series. She knew from a young age that she wanted to write novels. Growing up in New England and traveling to Great Britain fueled a passion for history, while a love of puzzles of all kinds drew her to the mystery genre. She and her husband reside in Florida, where she loves to watch BBC productions, sip tea in the afternoons, and delve into the past. You can learn more about Alyssa and her books at AlyssaMaxwell.com.

”Series fans will be pleased that Emma and Derrick officially announce their intention to marry, leaving Emma to ponder how she will navigate the tedious and at times dangerous world of high society. Readers will look forward to the further adventures of Emma, who astutely illuminates the habits and mores of her day.” —Publishers Weekly on Murder at Beacon Rock

“Lifestyles of the wealthy combine with social commentary in a mystery set against the backdrop of Newport’s grand estates.” —Kirkus Reviews on Murder at Wakehurst

“This fantastic series continues with another installment, and plenty of twists, turns, and red herrings…[A] gripping and clever mystery about a sleuth who inhabits two worlds at once, and it will transport you to a time of luxury, greed, and the quest for power.” —Historical Novel Society on Murder at Wakehurst

“Maxwell once again exposes the underhanded doings of the wealthy ruling class while providing plenty of fascinating historical background. This entry is bound to delight both established fans and new readers.” —Publishers Weekly on Murder at Wakehurst

“What makes this ninth in the series, as well as the earlier eight, so enjoyable is Alyssa Maxwell’s combination of vivid historical detail and her excellent writing craft, blending character development and an intriguing plot. Murder at Wakehurst is an engrossing mystery. Read it!” —Murder on the Beach Mystery Bookstore

“In this delightful addition to the series, which would serve as a good introduction to newcomers, Maxwell’s focus on class and gender division is sharp and accomplished. Come for the late 19th-century historical detail; stay for the intrigue.” —Library Journal on Murder at Kingscote

“A charming addition to the Gilded Age series that’s laced with social and historical commentary.”—Kirkus Reviewson Murder at Kingscote

“Two shocking murders occur at Kingscote, amid many plot twists, fascinating historical details (a parade of flower-decked horseless carriages, a sterling silver box of chocolates, a boxing match), and a plentiful supply of adjectives, making this latest mystery in the series—based on historical, peculiar, but non-homicidal, events—as lightly entertaining as its gilded predecessors.”—Historical Novel Society on Murder at Kingscote

“The sense of place and history is palpable and the inclusion of historical figures and the intricate crimes make this a very entertaining, worthwhile series.” —The New York Public Library on the Gilded Newport Mystery series

“Numerous plot twists, a richly described 1898 setting, details of the lives and times of the rich, and a principled, smart main character who is making her own way in the world distinguish this entry in the series. It will appeal to those who enjoy historical mysteries with strong, ahead-of-their-times female characters.” —Booklist on Murder at Crossways

“Alyssa Maxwell entertains readers once again…a light, summer-time read perfect for the beach.” —Newport This Week on
Murder at Crossways

“The setting and historical details are vibrant and colorful, especially real-life figure Mamie Fish—a grand dame in every sense of the phrase—and the glittering fashions and homes of the Newport rich. The Harvest Festival itself is more than worth the price of admission.” —Criminal Element on Murder at Crossways

“Maxwell gives an honest portrayal of the Gilded Age, its pretentious high society, and the second-class status of women. Using just the right period details, Maxwell puts the reader into the story without bogging down the unfolding murder mystery. Fans of the series will enjoy this caper.” —Historical Novel Society on Murder at Crossways

“Plenty of red herrings and an intimate look at the world of the wealthy and famous make for a rich broth of a mystery.” —Kirkus Reviews on Murder at Ochre Court

“A sweet, delightful mystery, which is sure to appeal to historical-fiction and mystery readers alike.” —Foreword Reviews on A
Pinch of Poison

“The characters are fun, the dialogue is both charming and intelligent, but the scenery that makes up that extravagant time period in New England really is the gem in these glorious tales.” —Suspense Magazine on Murder at Rough Point

“Several cuts above the usual feisty heroine tale; it provides a good picture of life among the privileged—and not-so-privileged—classes in Gilded Newport.” —San Jose Mercury News on Murder at Beechwood

“It’s such fun to get lost in another era…Plenty of twists to keep me guessing!” —First for Women on Murder at the Breakers