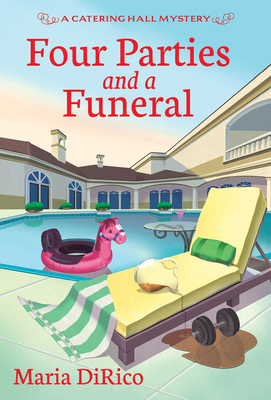 This is book number 4 in the A Catering Hall Mystery series.

Agatha Award-winning author Maria DiRico returns with the fourth book in the Catering Hall Mystery Series, starring Mia Carina who is coming to grips with being back in Astoria, Queens, and running her Italian-American family’s catering hall, Belle View Banquet Manor but a TV casting call is about to put murder in the spotlight . . .

The June events schedule at Belle View is busting out all over—proms, graduations, and of course, weddings. There are unexpected bookings too, including a casting call for the pilot of Dons of Ditmars Boulevard. But soon, Mia’s fears about the cheesy reality show are confirmed . . .

Belle View quickly becomes the site of a sea of wanna-be goombahs and phony girlfriends, and some of Mia’s friends insist on getting in on the action. The production company owner and his executive producer ex-wife—who’s also very minor British royalty—have assembled a motley crew that does as much infighting and backstabbing as the on-screen “talent.” Even so, it’s a shock when a dead body is found in the pool house of a local mansion rented by the show . . .

Murder might boost the ratings. But Mia intends to make sure the killer gets jail time, not airtime . . .

Maria DiRico is the pseudonym for Ellen Byron, author of the award winning, USA Today bestselling Cajun Country Mysteries. Born in Queens, New York, she is first-generation Italian-American on her mother's side and the granddaughter of a low-level Jewish mobster on her father's side. She grew up visiting the Astoria Manor and Grand Bay Marina catering halls, which were run by her Italian mother's family in Queens and have become the inspiration for her Catering Hall Mystery Series. DiRico has been a writer-producer for hit television series like Wings and Just Shoot Me, and her first play, Graceland, appears in the Best Short Plays collection. She's a freelance journalist, with over 200 articles published in national magazines, and previously worked as a cater-waiter for Martha Stewart, a credit she never tires of sharing. A native New Yorker who attended Tulane University, Ellen lives in Los Angeles with her husband, daughter, and two rescue dogs. She can be found online at EllenByron.com and ChicksOnTheCase.com.

Praise for the Catering Hall Mysteries

“Murder crashes the party…Her zany cast will have readers wondering whether DiRico’s series debut is set in Belle View or Bellevue.” —Kirkus Reviews

“The Catering Hall Mystery series keeps going from strength to strength as it follows the adventures of our thoroughly modern heroine. Mia’s narrative voice is refreshingly lively and believable as an Astoria girl navigating life in the 21st century…Loads of humor and charm.” —Criminal Element on It’s Beginning to Look a Lot Like Murder

“Amiable….A quick-witted girl from the boroughs who makes good as a sleuth.” —Kirkus Reviews on Long Island Iced Tina

“Just as much fun as the first, with realistic characters…The mystery was complicated and clever, and the dialog witty and believable. It was also really great to have a mystery set in Astoria-Queens; small-town cozies are awesome, but it’s always refreshing—and frankly more easily relatable for me—to have that aesthetic transplanted to the big city.” —Criminal Element on Long Island Iced Tina

“Fast-paced and hilarious, the book trades in twists that undermine stereotypical expectations, impressing me again and again with how fresh and modern this novel feels in a typically traditional subgenre.” —Criminal Element

"A fresh, fun, and fabulous debut to what promises to be a fantastic new mystery series!" —Jenn McKinlay, New York Times bestselling author

"Mamma mia! What a nifty story. This endearing new heroine has a lot on her plate—all of it delicious fun!" —Laura Levine, author of Death of a Gigolo

"A catered feast of a mystery." —Sherry Harris, author of Let’s Fake a Deal