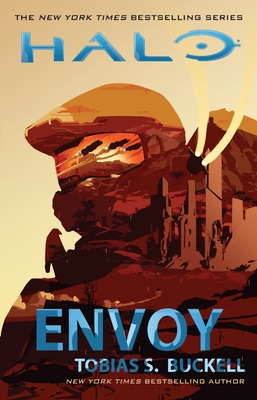 This is book number 20 in the Halo series.

It has been six years since the end of the Covenant War...and yet on the planet Carrow, a world on the edge of the Joint Occupation Zone, a decisive new battle suddenly erupts. Human colonists and the alien Sangheili have already been living a tension-filled co-existence in this place, with Unified Earth Government envoy Melody Azikiwe attempting to broker a lasting peace between their two species. But as civil war now engulfs the Sangheili settlers, Melody must act on an additional covert assignment courtesy of the Office of Naval Intelligence: find a way to free the SPARTAN-IIs known as Gray Team, held in stasis since the end of the war by a cunning Elite fleetmaster consumed with vengeance. And none can anticipate the ongoing violence leading to the discovery of an even greater, unstoppable threat—one hidden for eons below the surface of the planet….

Called “violent, poetic, and compulsively readable” by Maclean’s, science fiction author Tobias S. Buckell is a New York Times bestselling writer born in the Caribbean. He grew up in Grenada and spent time in the British and US Virgin Islands, and these places influence much of his work. His Xenowealth series begins with Crystal Rain. Along with other stand-alone novels and his more than fifty stories, Tobias’s works have been translated into eighteen different languages. He has been nominated for such awards as the Hugo, Nebula, Prometheus, and John W. Campbell Award for Best New Science Fiction Author. His latest original novels are Hurricane Fever, a follow-up to the successful Arctic Rising, which NPR says will “give you the shivers,” and the acclaimed Halo: Envoy. He currently lives in Ohio, with his wife, twin daughters, and a pair of dogs. He can be found online at TobiasBuckell.com.