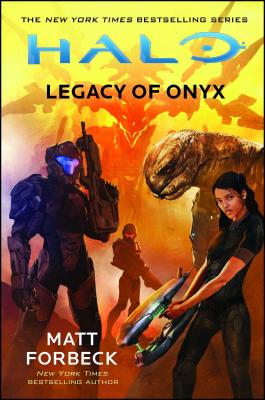 This is book number 22 in the Halo series.

Molly Patel was only seven years old when the alien alliance known as the Covenant destroyed her homeworld and killed her family. As one of the few to escape the glassing of Paris IV, and despite the United Nations Space Command winning the war on behalf of humanity, Molly never forgot how much she had lost.

Nine years later, when her adoptive parents—research scientists specializing in ancient Forerunner technology—are called to the mysterious and wondrous place known as Onyx, Molly vehemently objects. It’s not so much that Molly’s concerned about relocating to inside a spherical construct the diameter of an entire solar system, but the fact that she also has to live alongside members of the same alien species that murdered her family. And when the Servants of the Abiding Truth—a violent ex-Covenant sect under the guidance of the notorious Pale Blade—somehow makes its way inside this supposedly impregnable sphere, Molly is now forced to consider if she and her new parents have made a terrible and fatal mistake in coming here....