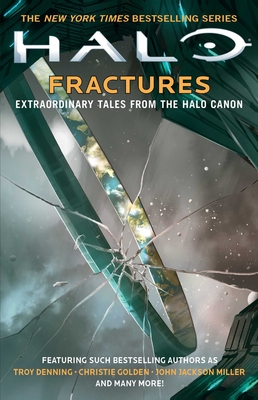 This is book number 18 in the Halo series.

Launch once more into galaxy-spanning conflict and legendary heroism…shards of an ever-expanding journey where human and alien alike find their finest hours in facing their greatest challenges. These scattered stories span untold millennia, from the age of the ancient custodial race known as the Forerunners…to the aftermath of the Covenant’s bloody war against humanity…and even the shocking events surrounding the resurrection of the mysterious Guardians. Halo: Fractures explores mythic tales of bravery and sacrifice that blaze brightly at the very heart of the Halo universe.

New York Times bestselling and award-winning author Christie Golden has written more than forty novels and several short stories in the fields of science fiction, fantasy, and horror. Among her many projects are over a dozen Star Trek novels and several original fantasy novels. An avid player of World of Warcraft, she has written two manga short stories and several novels in that world. Golden lives in Tennessee. She welcomes visitors to her website: ChristieGolden.com.

Called “violent, poetic, and compulsively readable” by Maclean’s, science fiction author Tobias S. Buckell is a New York Times bestselling writer born in the Caribbean. He grew up in Grenada and spent time in the British and US Virgin Islands, and these places influence much of his work. His Xenowealth series begins with Crystal Rain. Along with other stand-alone novels and his more than fifty stories, Tobias’s works have been translated into eighteen different languages. He has been nominated for such awards as the Hugo, Nebula, Prometheus, and John W. Campbell Award for Best New Science Fiction Author. His latest original novels are Hurricane Fever, a follow-up to the successful Arctic Rising, which NPR says will “give you the shivers,” and the acclaimed Halo: Envoy. He currently lives in Ohio, with his wife, twin daughters, and a pair of dogs. He can be found online at TobiasBuckell.com.

Joseph Staten is the senior creative director at Microsoft and was the writer and creative lead for Halo: Combat Evolved, Halo 2, and Halo 3, as well as Halo: ODST and Halo: Reach. He is the New York Times bestselling author of Halo: Contact Harvest and the novella Halo: Shadow of Intent. He lives with his family in Washington.

James Swallow is a New York Times and Sunday Times (UK) bestselling author, BAFTA-nominated screenwriter, and the only British writer to have worked on a Star Trek television series. His Star Trek fiction includes The Latter Fire, Sight Unseen, The Poisoned Chalice, Cast No Shadow, Synthesis, Day of the Vipers, The Stuff of Dreams, Infinity’s Prism: Seeds of Dissent, and short stories in Seven Deadly Sins, Shards and Shadows, The Sky’s the Lim­it, and Distant Shores. His other works include the Marc Dane thriller series and tales from the worlds of 24, Doctor Who, Star Wars, Halo, Warhammer 40,000, and more. He lives and works in London.

Frank O'Connor is the Franchise Development Director for the HALO franchise at 343 Industries. He lives in Washington.

Kelly Gay is the critically acclaimed author of the Charlie Madigan urban fantasy series. She is a multi-published author with works translated into several different languages. She is a two-time RITA nominee, an ARRA nominee, a Goodreads Choice Award Finalist, and a SIBA Book Award Long List finalist. Kelly is also the recipient of the North Carolina Arts Council Fellowship Grant in Literature. She has authored the short story, “Into the Fire,” featured in Halo: Fractures, and the novella, Halo: Smoke and Shadow. She can be found online at KellyGay.com.