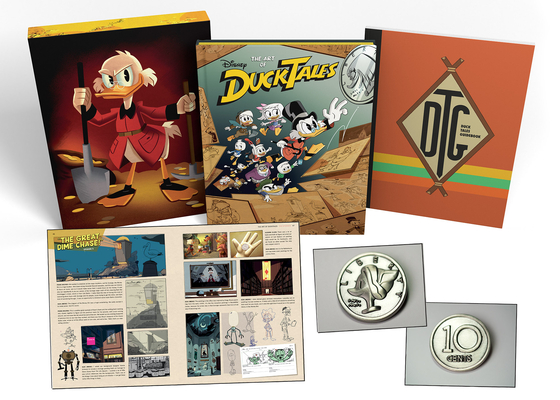 Scrooge McDuck and nephews Huey, Dewey, and Louie are back in the 2017 remake of the classic series from Disney Television Animation, DuckTales! Now, find out about the making of DuckTales and read stories from the developers and cast covering every episode from all three seasons!

The deluxe edition of the Art of DuckTales gives you all the content of the standard edition along with a slipcase that houses a gold-gilded version the book, an exclusive DuckTales Guidebook that contains expanded versions of the interviews with the crew and cast, and a finely-crafted replica of Scrooge’s Number One Dime!

Ken Plume writes, does interviews, produces, co-hosts podcasts, plots, and sings horribly. He runs FRED Entertainment (www.ASiteCalledFRED.com), where he hosts the interview series A Bit of a Chat with Ken Plume. Ken produced animation and podcasts for Kevin Smith (SModcast, SModimations), produced the documentary Milius, co-authored the children’s book There’s A Zombie In My Treehouse, and is the co-author of Go Team Venture: The Art & Making Of The Venture Bros. from Dark Horse Books.