American Hemp: How Growing Our Newest Cash Crop Can Improve Our Health, Clean Our Environment, and Slow Climate Change (Paperback) 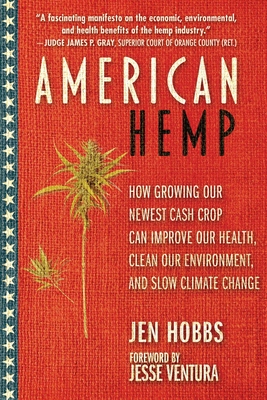 If there was ever a time to make the most of American hemp, our newest cash crop, the time is now. The blueprint is here; you’re reading it.—Governor Jesse Ventura

December of 2018 marked a largely unprecedented victory for cannabis. The 2018 Farm Bill passed and with it hemp became legal. What the federal government listed for decades as a schedule 1 narcotic was finally classified as an agricultural crop, giving great promise to the rise of a new American hemp industry.

Filled with catchall research, American Hemp examines what this new domestic crop can be used for, what makes it a superior product, and what made it illegal in the first place; the book also delves into the many health and medical benefits of the plant. Hobbs weighs in on how hemp can improve existing industries, from farming to energy to 3D printing, plus how it can make a serious impact on climate change by removing toxins from the soil and by decreasing our dependence on plastics and fossil fuels. The table of contents includes:

American Hemp lays out where we are as a nation on expanding this entirely new (yet ancient) domestic industry while optimistically reasoning that by sowing hemp, we can grow a better future and save the planet in the process.

Jen Hobbs has been a publicity consultant for the greater part of her career, representing Oscar and Emmy award-winning clients as well as politicians and authors. She has worked behind-the-scenes with Jesse Ventura since 2007 and shares his enthusiasm for searching for the truth, no matter where it leads. In 2016, she co-authored Jesse Ventura’s Marijuana Manifesto, which inspired the content for this book. After visiting and living in several states and countries, Hobbs now resides in O’Fallon, Missouri with her husband, Andrew, and daughter, McKayla, and currently employs her artistic talents through her art and custom jewelry company Hobbs Superior Handmade Supply.

Jesse Ventura is the former independent governor of Minnesota. He is also a former US Navy frogman, a professional wrestler, a movie actor, a visiting fellow at Harvard Kennedy School of Government, and the New York Times bestselling author of seven books, including American Conspiracies, 63 Documents the Government Doesn’t Want You to Read, and Don’t Start the Revolution Without Me! He was the host and executive producer of truTV’s Conspiracy Theory with Jesse Ventura, which won the Stony Award from High Times magazine in 2010. He was also the host of the political talk show Off The Grid, which aired on RT America and online at Ora.tv. He has a reputation as a rebel and a freethinker, and he has no qualms about questioning authority. He spends half the year in Baja, Mexico and the other half in his home state of Minnesota.

"This book not only explains the potential benefits hemp for enriching our planet, but also how we can encourage lawmakers to make hemp easier to access." —Ministry of Hemp

“Hemp has an amazing and positive story. Throughout history it has been relied upon to clothe, feed, and shelter people all over the world, and recently it has also been used medically to reduce suffering from a wide variety of maladies. But beginning in 1937 with the passage of the Marijuana Tax Act, our own United States Government wrongly began the process of vilifying it by linking it to marijuana. Yes, the plants are similar, but hemp has never caused any harm whatsoever to anyone! But finally, hemp is now making a comeback. And one of the guiding lights who is showing the way is Jen Hobbs in her book American Hemp. The title says it all. A fascinating manifesto on the economic, environmental, and health benefits of the hemp industry. Read this book, and you will agree!”
—Judge James P. Gray, Superior Court of Orange County (Ret.)

“This ancient plant may be a bright light leading the way to bring over 30,000 products to market and help farmers prosper well into the future. Jen Hobbs’s book is a must read for all true hemp believers!”
—Pam Ellison, founder of Minnesota Frozen Farm Forum

“This book is a must-read for the licensed and non-licensed hemp cultivators and organic farmers looking for a crop with ultimate sustainability. The important history of hemp and the many uses of the sativa plant are examined. The research is already here, the facts are in.”
—Paul Frank, CEO of Hemp Solutions of Minnesota

“Hemp has so much potential to help farmers, create jobs, spark innovation and new technologies, and make existing products better, stronger, and more sustainable. Thank you to Jen Hobbs for using her writing talent to educate and emphasize the importance of hemp for our country’s future.”
—Erica McBride Stark, executive director of the National Hemp Association

“I ask questions for a living as a comedian and talk show host and have often wondered why hemp is illegal to grow. Why aren’t we growing this plant and using it for so many things? Why do we grow way too much of one crop and make another illegal? What can hemp do for you? Well, in this awesome book Jen Hobbs offers all the answers we need to make this happen.”
—Pete Dominick, comedian and Sirius/XM radio host

"American Hemp is the most important book ever written on the subject. Jen Hobbs has crafted a revealing expose on how the US government and powerful corporations conspired to suppress a natural substance that possesses substantial beneficial characteristics for human beings and the environment. All Americans need to read this important book." —Don Jeffries, author of Crimes and Cover-Ups in American Politics: 1776-1963 and Survival of the Richest

"I’m impressed with the time and energy Jen Hobbs put into this deep dive on hemp in America. I hope the book meets with great success in changing the public’s perception of cannabis." —David L. Nathan, MD, DFAPA, Doctors for Cannabis Regulation, President, Board of Directors