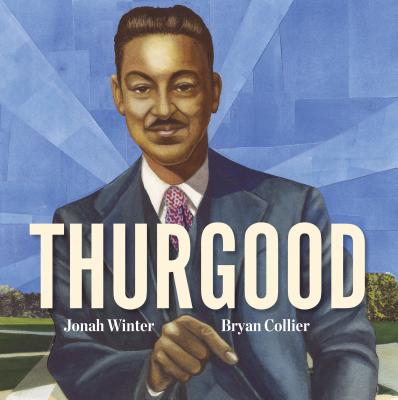 Thurgood Marshall--the first black justice on the Supreme Court and a giant of the civil rights movement--jumps to life in this inspiring picture-book biography from an award-winning author and six-time Coretta Scott King, four-time Caldecott Honor-winning illustrator.

Thurgood Marshall was a born lawyer--the loudest talker, funniest joke teller, and best arguer from the time he was a kid growing up in Baltimore in the early 1900s. He would go on to become the star of his high school and college debate teams, a stellar law student at Howard University, and, as a lawyer, a one-man weapon against the discriminatory laws against black Americans. After only two years at the NAACP, he was their top lawyer and had earned himself the nickname Mr. Civil Rights. He argued--and won--cases before the Supreme Court, including one of the most important cases in American history: Brown v Board of Education. And he became the first black U.S. Supreme Court Justice in history.

Like its subject, here is a biography that crackles with energy and intensity--a great introduction to a great man.

Jonah Winter is the award-winning author of more than forty nonfiction picture books that promote environmental awareness and social and racial justice. Among them are Here Comes the Garbage Barge!; Ruth Bader Ginsburg: The Case of R.B.G. vs. Inequality; My Name is James Madison Hemings; Barack; The Founding Fathers!; and Lillian’s Right to Vote, a Jane Addams Children’s Book Award recipient and Kirkus Prize finalist. Visit him at jonahwinter.com.

A WASHINGTON POST BEST CHILDREN’S BOOKS OF THE YEAR!

"Winter and Collier have created a catalyst that will inspire readers to learn more about this giant of American history." —Publishers Weekly, Starred Review

“A memorable portrait of a legal giant.” —Booklist, Starred Review

“Informative, inspiring, and exciting. . . . A fervent celebration of a man whose work improved the lives of millions of Americans.” —School Library Journal, Starred Review

“A lively narrative with plenty of drama…. Readers may find inspiration as well as information here.”  —Bulletin

“Collier’s illustrations, rendered in watercolor and collage in shades of tan, green, and gray, set the scenes and enliven the historic material.” —The Horn Book