Never Have I Ever (Paperback) 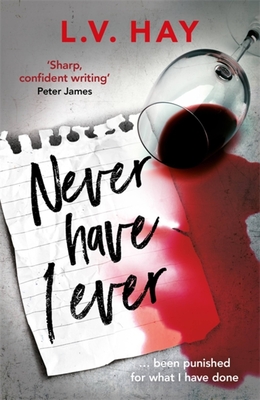 Never Have I Ever been punished for what I have done . . .

'An unsettling whirlwind of a novel with a startlingly dark core. 5 Stars' Sun on The Other Twin

They add their own rules, going from sharing secrets to sharing firsts.

And then it all goes spiraling out of control.

'Never have I ever been punished for what I have done'

She thought this was over. But it looks like it's her turn to play

Because no matter how far it goes, you have to obey the rules of the game. And the game is never really over.

'Well written, engrossing and brilliantly unique, this is a fab debut' Heat on The Other Twin

L.V. Hay is a novelist, script editor and blogger who helps writers via her Bang2write consultancy. She is the associate producer of Brit Thrillers Deviation (2012) and Assassin (2015), both starring Danny Dyer. Lucy is also head reader for the London Screenwriters' Festival and has written two non-fiction books, Writing & Selling Thriller Screenplays, plus its follow-up Drama Screenplays. She lives in Devon with her husband, three children, six cats and five African Land Snails.
Follow Lucy on Twitter @LucyVHayAuthor, on Facebook facebook.com/LucyHayB2W and her website: lucyvhayauthor.com