Leonard (My Life as a Cat) (Hardcover) 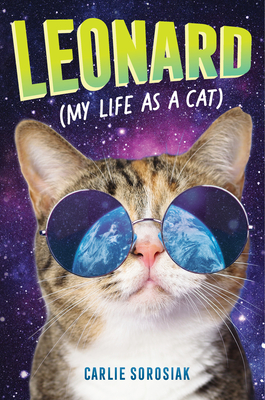 He’s not a stray house cat, he’s an immortal being. And now he must choose whether to return to his planet or remain with his new human friend in a humorous, heart-tugging story from the author of I, Cosmo.

The cat that Olive rescues from a flood has a secret: he’s not really a cat at all, but an alien who crashed to Earth on a beam of light. The cat, whom Olive names Leonard, was prepared to visit the planet as a human—but something went wrong. Now Leonard may never know what it’s like to hold an umbrella, go bowling, or host a dinner party. (And his human jokes still need some work: Knock, knock. Who’s there? Just Leonard. It is me.) While Olive worries about whether she will have to move after her mom and her new boyfriend get back from their summer vacation, Leonard tries to figure out how to get from South Carolina to Yellowstone National Park, because if he’s not there at the end of the month, he’ll miss his ride home. But as Olive teaches Leonard about the beautiful and confusing world of humans, he starts to realize how much he cares about this particular one. A sweet and dryly funny story about what it means to be human—and what it means to be home.

Carlie Sorosiak is the author of the middle-grade novel I, Cosmo as well as two novels for young adults: If Birds Fly Back and Wild Blue Wonder. She lives in Atlanta, Georgia.

An alien hurtles toward Earth, expecting to shape-shift into human form and work as a Yellowstone park ranger until his scheduled rendezvous for departure. Instead, his shape is decidedly catlike, and his landing spot (a tree in South Carolina) is way off target...Readers will particularly enjoy Leonard’s distinctive first-person narrative, sprinkled with an alien’s refreshing observations about the language, habits, and idiosyncrasies of Earth’s two- and four-legged inhabitants...Often amusing and occasionally moving, this imaginative chapter book is never less than fully engaging
—Booklist (starred review)

Leonard quotes Walt Whitman, has an affinity for knock-knock jokes and “I Love Lucy” and absolutely adores his shiny yellow rain slicker. Oh, and he’s an alien trapped in the body of a cat. . . . Readers will delight in his feline-out-of-water wonder at things we humans take for granted, from cheese to thumbs to umbrellas. They’ll also easily relate to his feelings of frustration, longing and excitement as he and Olive learn to accept and celebrate what makes them each unique. . . . Leonard is a witty, inventive and wonderful tale that encourages readers to step back and see the beautiful picture painted by our interrelated world. It invites us to appreciate the marvelous in the mundane, and to take a closer look at the animals we encounter, just in case they’ve got something important to say.
—BookPage (starred review)

An alien in the body of a cat visits Earth and bonds with a human girl... Humanity isn’t just for humans in this earnest, heartfelt story told from Leonard’s perspective. The characters experience loneliness and distress, but that makes the happiness and comfort of friendship all the more important. The alien aspect creates intrigue but mostly serves as a vehicle to showcase the preciousness of the human experience from an outsider’s perspective... A comforting read about connection and compassion.
—Kirkus Reviews