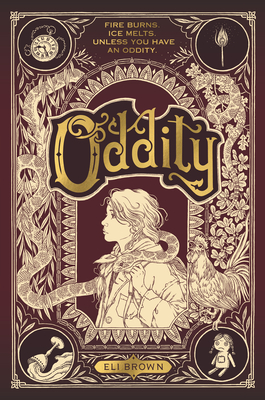 The daughter of a murdered physician vows to protect the magical Oddity he left behind in an alternate nineteenth century where a failed Louisiana Purchase has locked a young Unified States into conflict with France.

It’s the early 1800s, and Clover travels the impoverished borderlands of the Unified States with her father, a physician. See to the body before you, he teaches her, but Clover can’t help becoming distracted by bigger things, including the coming war between the US and France, ignited by a failed Louisiana Purchase, and the terrifying vermin, cobbled together from dead animals and spare parts, who patrol the woods. Most of all, she is consumed with interest for Oddities, ordinary objects with extraordinary abilities, such as a Teapot that makes endless amounts of tea and an Ice Hook that freezes everything it touches. Clover’s father has always disapproved of Oddities, but when he is murdered, Clover embarks on a perilous mission to protect the one secret Oddity he left behind. And as she uncovers the truth about her parents and her past, Clover emerges as a powerful agent of history. Here is an action-filled American fantasy of alternate history to rival the great British fantasies in ideas and scope.

Eli Brown is an acclaimed writer of adult novels. This is his first book for young people. He lives outside San Francisco.

“A thrillingly original fusion of adventure, magic, and epic alternate history, Oddity zings with storytelling panache. Peopled by rich, strange, and delightful characters—both human and eerily otherwise—and featuring a superb heroine, it is inexhaustibly inventive, pouring forth new wonders with the marvelous ease of the magical Wineglass that never runs dry."
—Jonathan Stroud, author of the Lockwood & Co. series and the Bartimaeus Sequence

Set in an alternate version of early 19th-century America, where war is looming between a massive army led by Napoleon Bonaparte (the only actual historical figure mentioned in the book) and an assortment of fighters led by the ambitious Senator Auburn, this imaginative fantasy-adventure is packed with magical items. . . Rytter’s striking black-and-white linocuts add to the book’s dark, magical feel. This strikingly original, beautifully written fantasy novel will appeal to high-level readers seeking magical adventure.
—School Library Journal (starred review)

...reads like a richly imagined blend of Lloyd Alexander’s The Black Cauldron and Philip Pullman’s The Golden Compass, and it is fueled by Clover’s desire to better understand her family’s past and so herself. Matches that stop time, an evil witch, and a talking rooster are but a few of the wonders Brown has in store for his readers.
—Booklist

In an alternate 1822, the uneasy peace between America, the French-controlled Louisiana Territory, and the fictional Sehanna Confederation is on the verge of collapse....Carefully constructed settings, such as an intoxicating marsh derived from an endlessly refilling wine cup and the oddities at the tale’s center—a perpetually freezing ice hook, time-stopping matches—mix the mundane and the impossible, driving a memorable adventure studded with light historical references and Rytter’s woodcut-style illustrations.
—Publishers Weekly

From a dizzying allotment of intriguing pieces, Brown builds a strongly woven alt-history fantasy adventure that is equal parts violence and resilience, desperation and hope, with occasional doses of the grotesque. Clover makes for an admirable heroine, who builds strength through adversity and friendships through kindness. The richness of the imagined world shines through, a strength reinforced by detailed woodcut-style illustrations and a glossary of notable oddities at novel’s end.
—Bulletin of the Center for Children's Books

Set in an alternate 19th century Unified States, this story begins with Clover discovering her first oddity. . . . Clover does what is needed to discover the truth. She is brave, smart, and loyal. The character's expressive dialogue, along with the vivid narration that establishes the setting, immerses the reader in this alternate 19th century world. The swift pace captures and draws the reader along. This first book in a planned duology will leave the reader longing to hear the conclusion to Clover's story.
—School Library Connection

In this strange yet somehow familiar landscape, Brown offers a sweeping political backdrop of ambition, greed and the thread of endless war as his action-packed narrative races along.
—The Buffalo News

This is the rare book for young readers that balances philosophy with action, and individual bravery with the need to rely on allies.
—Historical Novel Society