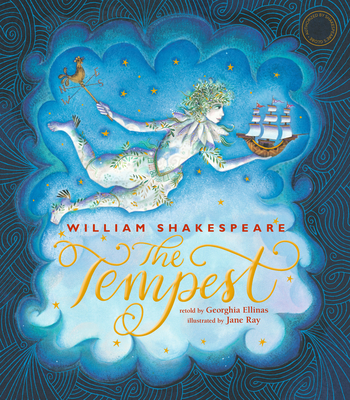 Discover the Bard’s dazzling play about magic, revenge, and forgiveness, reimagined by Shakespeare’s Globe as a gorgeously illustrated picture book for children.

I told him that if I were a mortal, I would forgive them.

Ariel is a spirit of the air who can fly, ride on clouds, and glow bright as fire. When his master, the magician Prospero, is overthrown by his brother as the Duke of Milan, Ariel joins Prospero and his baby daughter on a journey that will bring them to a beautiful island ruled by the monstrous Caliban — and to a series of events that lead to a vengeful storm, confounding spells, true romance, and a master who is persuaded to give his transgressors a second chance. Narrated from Ariel’s perspective, the story is told in language that is true to the original play but accessible to all. With exquisite illustrations by acclaimed artist Jane Ray, this captivating retelling is a magical way to introduce children to one of the best-loved works of the world’s greatest playwright.

Shakespeare’s Globe in London is inspired and informed by the unique historic playing conditions of its iconic theatres. Its diverse program of work harnesses the power of performance, cultivates intellectual curiosity, and excites learning to make Shakespeare accessible for all.

Georghia Ellinas, a former English teacher, has focused on working with teachers across the U.K. and the world for the last thirty years. She has written several books about teaching Shakespeare, and in her role as Head of Learning at Shakespeare's Globe was responsible for creating programs to make Shakespeare accessible and relevant to children of all ages. She lives in the south of England.

Jane Ray is one of the most acclaimed contemporary children's book illustrators. Her books include The Twelve Days of Christmas and Hummingbird. She has been nominated four times for the Kate Greenaway Medal. She lives in London.

The text is perfectly matched by Ray's jaw-droppingly beautiful illustrations, which will enchant readers from the front cover to the final curtain. The greens of the waters and the blues of the island's night sky are so lush and inviting that readers will wish they could enter the book. Peppered throughout the story are italicized fragments of Shakespeare's dialogue, giving both young and older readers something to enjoy...A must-own adaptation chock-full of such stuff as kids' dreams are—and will be—made on.
—Kirkus Reviews (starred review)

Lovely and engaging, this accessible retelling of a theatrical staple will usher in a new generation of Shakespearean devotees...An engaging work with beautiful illustrations.
—School Library Journal (starred review)