Gargantis (The Legends of Eerie-on-Sea #2) (Paperback) 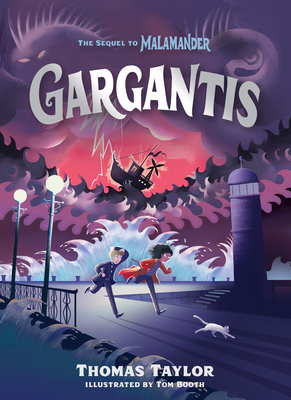 This is book number 2 in the The Legends of Eerie-on-Sea series.

In the second fantasy set in Eerie-on-Sea, Herbert and Violet team up to solve the mystery of Gargantis — an ancient creature of the deep with the power to create life-threatening storms.

There's a storm brewing over Eerie-on-Sea, and the fisherfolk say a monster is the cause. Someone has woken the ancient Gargantis, who sleeps in the watery caves beneath this spooky seaside town where legends have a habit of coming to life. It seems the Gargantis is looking for something: a treasure stolen from her underwater lair. And it just might be in the Lost-and-Foundery at the Grand Nautilus Hotel, in the care of one Herbert Lemon, Lost-and-Founder. With the help of the daring Violet Parma, ever-reliable Herbie will do his best to figure out what the Gargantis wants and who stole her treasure in the first place. In a town full of suspicious, secretive characters, it could be anyone!

Thomas Taylor is an award-winning author-illustrator for children whose debut novel, Malamander, kicked off this mystery series. He illustrated the cover for the original British edition of the first Harry Potter book and has since gone on to write and illustrate several picture books and young adult novels, including the graphic novel Scarlett Hart: Monster Hunter by Marcus Sedgwick. Thomas Taylor lives on the south coast of England.

Tom Booth makes marks. He makes marks in books like this one, and he sometimes makes marks that move. Some of his marks — like those in Don't Blink! and This Is Christmas — have been given stars. Raised just outside Philadelphia, Tom Booth made his earliest marks on his parents’ antique table. He thinks the table looks better now. His parents aren't so sure. He lives in Brooklyn.

Fortunately, Herbert has several allies, notably pushy but clever Violet Parma and Clermit, a small but well-armed clockwork hermit crab, to help him quiet the monster but keep it alive. Said quest bears fruit, but only at the climax of a suspenseful narrative awash in old legends, secret codes, strange local characters, and hints of startling revelations to come.
—Booklist

Having already dealt with one legendary sea creature in Malamander (BCCB 9/19), Herbie Lemon and his pal Violet must now face another monster that threatens Eerie-on-Sea...Fans of the first will continue to delight in Taylor’s wry humor, and one can only hope for more strange adventures in Eerie-on-Sea.
—Bulletin of the Center for Children's Books